Sometimes things crop up in a time-line on Twitter or Facebook, which just strike a chord with me and that was certainly the case this week when I saw this: 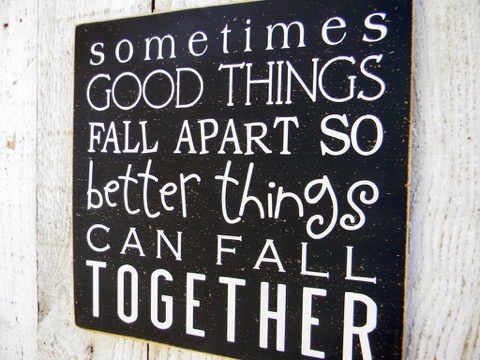 When our first efforts at buying a house in France fell apart, just before signing the Compromis de Vente, we were absolutely gutted and it would have been very easy to just give up and walk away. We felt though, that we had no other option, but to quickly dust ourselves down and get back to the hunt.

Lots of friends contacted us to say that it had probably happened for a reason and it just meant that something better was waiting for us and that perhaps, as a result, we were going to find a house where we really wanted one – in the Vaucluse.

After a week of frantic house-hunting, including visits with Agents and reporting back home each evening  we managed to whittle the list from 20 down to 5 and I arranged second visits with my hubby and youngest, who I collected from Toulouse Airport on Sunday afternoon….. I know Toulouse is hardly the nearest airport to L’Isle Sur La Sorgue but it somehow worked for us . We spent that evening just looking again at the videos of the houses we had booked to view and considering what we needed to ask about each one.

The main thing that we noticed about the houses we were visiting again was that the location was the critical factor, actually much more so than the age or state of the house and even the number of bedrooms & available outside space (which had formed a major part of our initial conversations on whether to view a house or not).

I know people always say that the main factor to look for in a house is location, location, location …….. but all too often it is easy to forget this when faced with a house that has everything else you are looking for……….however it really is the only thing about a property that can’t be changed – so during the previous week I had found myself dismissing apparently perfect houses just because the environment in which they were set was flawed in one way or another.

The first week had been hard work, but it had helped us to really hone down what it was we were looking for and ensured that the short time we had available was spent looking at the houses that were in the right locations and met as many of the original criteria we had given ourselves. The fact that we had 5 to visit again was quite amazing.

So we started again and it was nice to be able to visit the houses together, no longer relying on my (rather wobbly) video footage & (when I listened to it again) slightly surreal commentary. Having our youngest with us was actually a real benefit as he wasn’t backward in coming forward with his views and his insightful comments really made the difference to us when we were easily seeing the positives in every house we visited.

This was particularly the case with one house in a quiet, small hamlet, right in the plain between Roussillon and Gargas. The house had character, a stunning roof-terrace with a beautiful view and space for our bikes, plus excellent dog-walking and as such hit everything we wanted. As we were on the terrace our youngest just said ‘What will it be like in August when all these other roof terraces have people on them – won’t it be a bit like a holiday resort?’ ……….. and he was right – we were looking at the house on a quiet day in mid-February and the village was silent, with only a couple of houses occupied, but in August all would be full and the roof terraces to one side and just below the house we were looking at, would be in full use. We do enjoy our peace and an ability to get away so this property immediately dropped down the list.

We only visited 2 houses on the first day (the 2 that had been my favourites during the first week) – one had made my mouth go dry when I walked in and I had totally messed up the video as I was so taken by the house even though it only actually had 1 bedroom with walls (the other being a walk through room with an open-plan bathroom) – certainly not ideal for a family of 4 with 2 teenage boys! When I listened again to the video – I had spent the whole of my first visit trying (in my commentary) to justify to my family why it would be the perfect house for us! I must admit I was very happy (and slightly relieved) when my hubby & son were equally as taken by it.

Our second day was slightly more chaotic and we were thrown when one Agent showed us a property that she thought may just suit us and could probably (with a bit of negotiation) fall within our price-bracket. We had a firm favourite after the first day, but the house we were shown was a true ‘Coup de Coeur’ in a wonderful location and we fell in love on the spot, even though it had distinct drawbacks (not enough bedrooms, small roof terrace, not much natural light downstairs, no rear access for bikes, no parking… etc). After cobbling together every penny we could find (almost to the extent of emptying our pockets of loose change) we made an offer, which was duly refused.

After that we returned for a third visit to our preferred house from the first day and actually when we looked at it again we realised it had so much more to offer than the one we had fallen head over heels for. It had space to add bedrooms, a large terrace and small garden, the rooms were filled with light and so many places to store bikes that we would have to make a choice as to which place would be best. It also had parking, character and a stunning view, close to all the places we love to visit.

After a very short reflection we put in an offer, which (following a brief period of negotiation) was accepted and we are, of course delighted.

It goes without saying that this time we are keeping everything crossed that the purchase goes smoothly & that we don’t have to deal with the sale collapsing again. We did try using a specialist British solicitor during the last sale, but when everything started to fall apart he didn’t respond to our calls and so we have decided this time just to deal directly with a local Notaire in Apt. I have spoken to her and exchanged emails, discussing our needs and am hopeful that we wont regret our decision, but only time will tell …… all I know is that I feel happier having a degree of control by dealing with things ourselves, but I suppose only time will tell whether it is the right decision.

So back to the photo on my Twitter time-line……. we certainly now feel that the original purchase had to fall apart, because we are certainly feel that something better is coming together as a result………………. a dream realised in the Vaucluse.