A few weeks ago, when I was back in the UK and Andy was in France he did a ride that he was particularly excited about. He told me about it and yes it sounded lovely, until he said it was about 110km and had nearly 1500 metres of climbing. At that point I was happy just to hear his account of it, as it did sound rather lovely, whilst at the same time making a mental note never to let him talk me into doing it.

Fast forward to this week and the inevitable evening conversation about where our next day’s ride would be and Andy mentioned perhaps doing this ride, which involves breakfast at Simiane-La-Rotonde (without doubt now our favourite breakfast stop), before climbing up onto The Saint Christol Plateau, then back via Sault, Murs and Gordes. My initial reaction was to try to deflect him onto other rides, but he seemed very determined, to the point that I agreed I’d give it a go… then something happened that made the final decision for us.

On Twitter there was a post from a chap who had ridden to the summit of Mont Ventoux a short time ago and had bought his young son a snow globe as a gift. Unfortunately the globe had got broken when the boy had taken it to school for ‘Show and Tell’ and he was understandably really upset and his father had put out a plea in his post asking for anyone who may be near Mont Ventoux who could help in getting another one.

That was it, despite my concerns that this would be my longest ride and biggest climb ever on a bike, we agreed to go across to Sault in search of a replacement snow globe… There’s something nice about having a little task to keep you focused.

We started off heading up the road, past Caseneuve towards Viens to get to Simiane for breakfast. I know I’ve written about the Boulangerie here, many times before, but it really is the most superb place to stop and the Almond Croissants are the perfect fuel for a day in the saddle, although I always find myself wishing it wasn’t a steady 19 km climb to get there!

From there we snaked up the hairpins that take you up the side of the village to the Rotonde that dominates the skyline and on, ever upwards to the Saint Christol Plateau, making our way through the endless acres of lavender fields, all now bare of flowers and simply sage-green corduroy stripes into the distance.

By now though the wind, straight off the summit of Ventoux was almost blowing us backwards and we found ourselves giggling like kids as we slowly made our way towards Sault, heads bowed and with our legs turning like Whirling Dirvishes, battling into the head-wind…. It was so strong at times that even on some of the descents we were still having to pedal.

That said, the views were as stunning as ever in the beautiful light of a perfect (apart from the wind that is) autumn day and just before lunch we arrived in Sault and managed to find just what we were looking for in a gift shop, just before the owner shut the doors for lunch.

Happy that we had found a replacement for the much-loved snow globe….

… And even happier that the wind would now be in our backs, we turned and started to head back across the Vaucluse Plateau, back to the Luberon Valley.

Normally we would ride straight back through Saint Jean de Sault to Saint Saturnin, passing Chateau du Javon, but this time we were following Andy’s newly tested route and turned off the main road onto the back road that snakes along the hillside towards Méthamis.

It’s a lovely road he said, you just seem to go down until meeting the Murs road and turn off there. I am not sure what had taken place in his brain during the last ride, but the road certainly didn’t go down, in fact I would say for the first 4 km at least it went up a gradual but long incline.

After a short distance you reach the Belvédère Saint Hubert, where there are stunning views across to the head of the Gorges de La Nesque…

It is also one of the marked spots of the Chemin de la Mémoire, https://vauclusedreamer.wordpress.com/2017/03/01/%ef%bb%bfin-the-footsteps-of-the-resistance/

which details an incident that took place on 22nd August 1944 when German troops stopped at the barn at Saint Hubert (a short distance away). Having drunk 120 litres of wine and stolen everything they could find they made there way on, and were ambushed by Resistance fighters who destroyed the first vehicle. Sadly one of the young Resistance members, Robert Giraud who was only 19 was shot in the head and its is he who is remembered here.

From here we carried on through Saint Hubert and after a while the road finally started to drop down, following the contours of the hillside with great views back across towards Mont Ventoux.

We followed this down, until we met the junction to Murs and turned towards the village, flying along now with the wind fully in our backs. This road heads up towards the Col de La Ligne, but en route I had to stop, just to take in the views across Carpentras and the Dentelles towards the hazy bulk of the Massif Central in the far distance.

After a while you arrive at the Col de la Ligne, which marks the point where the Mur De La Peste crosses the road above Murs. The Mur de La Peste was built in a desperate and ultimately failed attempt to stop the Plague spreading towards Avignon and parts of it can still be seen across the area.

The road then starts a wonderful 7km run downhill towards Murs, clinging to the front edge of the plateau with views across the valley towards The Grand and Petit Luberon, The Alpilles and even Mont Saint Victoire in the distance.

Eventually you arrive in Murs by the rather beautiful Chateau…

… and despite the temptation to turn left and continue down the hill towards Apt and home, we instead turned right and followed the road out towards Gordes, where we knew we would be able to find something to east as we had long since burned off the croissants we’d eaten at breakfast. The road climbs again for a while before it drops down to the village, which is always a surprise as it seems to be perched so high on the hillside, when you see it from below.

Dropping into Gordes we found a sunny spot, out of the wind, on the stone seats at the bottom of the immense Chateau walls, devouring slices of Pizza that we bought at the Boulangerie and just taking a moment to enjoy a spot of people-watching.

Heading on again we dropped out of the village towards Roussillon, leapfrogging a group cycle tour that had come from La Coquillade that was being led by the friendly and knowledgeable local guide Gaetan Dupin.

We cut down through the vineyards, past Goult and rejoined the superb Veloroute du Calavon to head back along the valley, through Apt to our starting point – the perfect (almost flat) finish to the ride.

Arriving home it turned out that it was in fact the longest ride I had ever done and had the biggest climb I had ever done, but it’s already on my ‘must do again’ list.

The good thing is that the majority of the climbing is done in the morning , it incorporates our favourite breakfast spot and the views all the way around the ride are simply stunning.

As for the snow-globe, it made it back to the house in one piece, snuggled in its box in Andy’s back pocket and is now on its way to the UK, where hopefully it will arrive in one piece in a few days time.

All in all and in every possible way, that was a really excellent day! 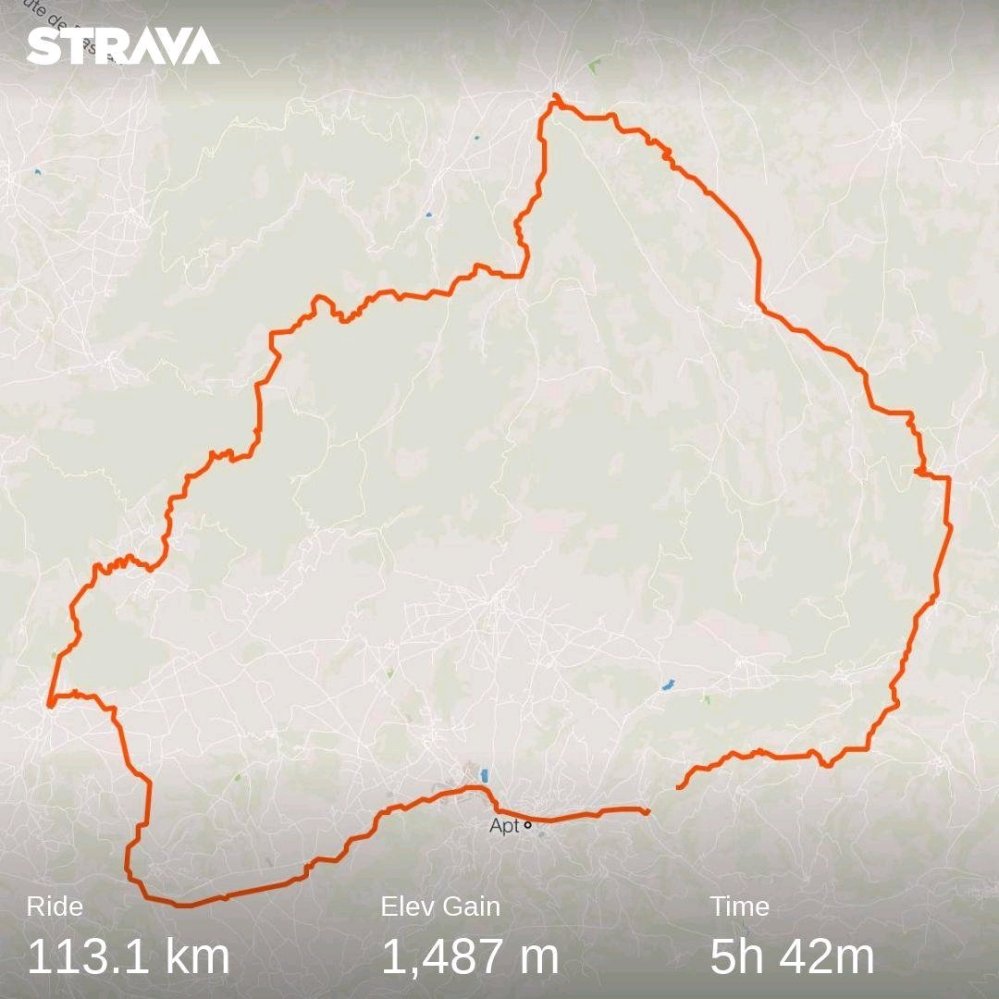