The building work starts and the water stops….

By the start of November our little place was in a state of chaos in readiness for the work to start. The rooms were piled high with relocated furniture & building supplies and Andy had laid new Travertine floors throughout the 2 main spaces upstairs that would become the new bedrooms and bathrooms. This was never going to be the easiest of tasks – as nearly 50m2 of tiles had to be laid in rooms where every wall was wonky and straight lines were purely a figment of our imagination. Then things became rather more complicated when on the day he started to cut the first tiles, the water supply to the hamlet totally failed. 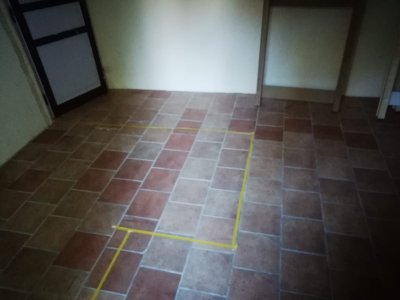 Sometimes you feel that everything conspires against you and that was certainly the case when, just as he had started to cut the first tiles, the water slowed to a trickle and then simply stopped, whilst Andy ploughed on using our plentiful supply of bottled water to cool the tiles as they were pushed through the cutting blade. The team from the local Services Des Eaux quickly arrived on the scene, did their investigations and disappeared with a cheery wave saying it would be sorted the next day.

Could the terrace get any dirtier

By this time Andy, the dog, the cat, the terrace and effectively everything inside (and outside) the house was covered in a thick layer of dust and grit that was just going to have to stay put overnight, with the hope that everything would be better in the morning. I think it would be fair to say that Andy had rather an uncomfortable night’s sleep before waking early the following morning to find a slight trickle of water coming from the taps, so he grabbed his chance and filled every bucket, jug and bin he could find before the trickle ground to a grinding and then very definite halt. At least this meant he could get on during the day, with the hope of being able to clean up a bit in the evening when the water was restored.

Distinctly dusty, grimy and grubby – not good when there is no water…….

Sadly the cheery wave & positive soundings from the Services Des Eaux team of the previous day, had disappeared and had been replaced by looks of frustration, a lot of shrugging and the sight of holes being dug in various places up the hill on the way to the hamlet. When bottles of water were left on the doorstep Andy resigned himself to another grimy, gritty and dusty night, as he made slow but sure progress laying the tiles. 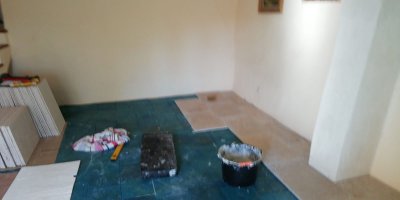 The tiles start to go down

The following day he again managed to fill containers at 5am before the rest of the hamlet woke up and continued making progress, only interrupted by a trip to Apt to fill drinking water bottles from a local ‘Source’ as the team continued their efforts to restore the water.

By that evening it was clear that the problem wasn’t going to be fixed quickly, signalled by a ‘Heath Robinson’ water supply having been set up to the Hamlet, which was designed with long lengths of pipe secured to the Fire Hydrant just down the lane. Although it was far from ideal, it was water and although you certainly couldn’t describe the water as having any pressure, Andy managed to enjoy a dribble of a shower that evening to finally wash off the crust of dirt and dust that covered him.

Things didn’t really improve after that with the number of holes being dug increasing daily and the water only managing to dribble out of the taps, taking almost 10 minutes to fill the washing up bowl and a simple shower became a long process that can best be described as being dribbled on by the dog waiting for her food – more ‘mildly-moist’ than ‘rainfall’. Little did we know it would be like this for nearly a month.

However Andy persisted and by the time I arrived the floors had been laid & grouted and our bed was back in place in the open space upstairs, waiting for the walls to be built around it. It looked stunning and the difficulties Andy had experienced trying to get the floor down quickly faded into the background and we were happy that we had made the right decision to re-tile the floors before the builders moved in.

Just the look we were hoping for ….

We spent the week together fitting in some cycling inbetween redrafting and redrawing the plans, having final conversations with the builder and electrician to make sure they could start on the date they had given us, which just happened to be whilst we were both back in the UK. 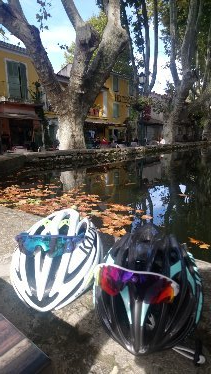 A break out on the bikes to Cucuron for coffee

It felt strange leaving the house with just our eldest son there to welcome them when they arrived, but we knew there was nothing else we could do to get everything ready and left as comfortable as we could be that when we returned the work would have started and that the walls would be going where we had planned them to be.

True to his word the builder arrived at 8am on the day he had told us and after a coffee got straight to work, setting up a scaffold plank runway from the terrace into the upper bedroom dragging all the equipment he would need in through the window. He spoke briefly to George, but then just got on working until heading off for lunch then returning just before 2 and working till 5.30.

How else do you get building equipment into the upstairs of the house?

In that first couple of days he worked alone but still managed to pull down the ceilings and clear all the debris from the bedrooms (to be) – how he managed to achieve so much in such a short period of time I still don’t know, but even that first day as George took us on a guided tour of the work via Skype, we knew that we were lucky to have ‘Jeff’ working for us and despite the distance felt confident that everything would be OK. 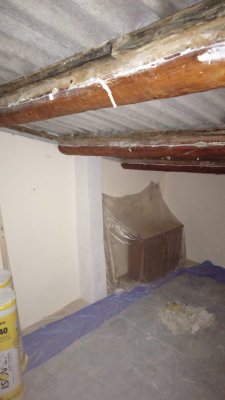 In the few days before I headed back down, the roof spaces were insulated and the metal struts put in place to hold the new plasterboard ceilings.

The thick insulation pinned into place

By the time I arrived the upstairs already felt different – yes it was dark, all the lights had been disconnected and it was a rather chaotic building site, but it was already warmer and I got the feeling that the birds were already hunting for a new roof to sit on and warm their feet.

Living in a building site is always an experience (we’ve done it often enough), but settling down that night on the airbed in front of the fire after experiencing first-hand the ‘dog-dribble’ shower it felt really exciting.

The transformation has started