As you have probably gathered by now we tend to enjoy spending our time in France cycling, visiting brocante market & vide greniers and drinking coffee, with the days passing by in a blur and us inevitably falling into bed each evening tired and satisfied after the day’s activities.

There are certainly worse ways of spending our days, so you can imagine the delight when we get to do all 3 favourite things at once. We’ve managed it a few times now and it’s amazing what we have managed to buy and transport back to the house just on our bikes, or more specifically on Andy’s bike. Not his road bike, but his trusted old, heavy black bike, affectionately known as the ‘Beast of Burden’, with a low gear so low that it can go up just about any hill.

I think the biggest purchase on one of our Brocante rides, was 2 years ago at the Assumption Day Vide Grenier at nearby Les Beaumettes, when Andy was turning heads on the way home towing a large (adult-size) tin bath on the trailer behind his bike. It certainly wasn’t the normal sight along the Veloroute du Calavon and through Apt!

Earlier this summer though we made the most of there being 3 events on one day at Menerbes, Bonnieux and Castellet, working out a route that would allow us to visit all of them on a nice circular ride. This time Andy took the ‘Beast of Burden’ with its panniers and a couple of bungee straps as a back-up, just in case we bought something that didn’t quite fit.

That day the ride took us out to Menerbes, where we sat on the wall below the church, drinking coffee and munching on croissants from the village boulangerie – a breakfast with a view is always the perfect way to start the day!

It wasn’t long before the first items were popped into the panniers. Nothing light of course, but a bag full of heavy old iron latches and locks to be used on doors in our forthcoming renovation works – as I mentioned in the last blog we like anything that will add instant character to the house and old ironmongery will only help.

From there we cycled on to Bonnieux, where another coffee was drunk and a few more items picked up and crammed into the panniers. This time heavy wooden chopping boards and a quirky old leather-working tool for use on my stalls at forthcoming Craft Fairs – all I can say is I didn’t appreciate how heavy a few pieces of old wood could be.

Andy though, seemed happy enough and was even considering whether he could fit a stuffed old Sanglier head onto the pannier rack with the bungee straps holding it in place – happily I convinced him it would be unlikely to survive the journey home (although my main motivation is I really didn’t want Stanley the Sanglier in the house – no not even as a piece to hang our hats on)

By now the panniers were looking decidedly lumpy, but Andy ploughed on up the hill and across the Plateau Des Claparedes towards Castellet, with me still having to cycle hard to even keep up (even though all I was carrying was my phone) .

Luckily Castellet only added one more old lock to the panniers and we decided that trying to fit a rather pretty old blue glass soda syphon in wasn’t really the best of ideas and we slowly made our way home, arriving back tired and satisfied after a pretty much perfect day.

This last Wednesday (Assumption Day) presented another opportunity to head out and see what could be found, but with one rather big draw back – this time I was on my own, with just my new road bike after Andy had returned to the UK with our youngest son for a few days.

Now I need to explain that my new bike isn’t like Miss Daisy, which had a basket and so had some storage space for emergency purchases…..

The new one is sleek and elegant with no room for panniers, basket or a trailer, so that does rather limit what can be bought, as if it doesn’t fit in my back pocket then it won’t be coming home.

With a great event at Les Beaumettes, the last day of the Antiques, Art and You Festival in L’Isle sur La Sorgue and another vide grenier in Apt it seemed the perfect opportunity for me to head off to see what I could find.
The event in Les Beaumettes takes place every Assumption Day and is one of the nicest events in the area. The village is closed to traffic and stalls are lined up on both sides of the road through the pretty village, spreading into car parks and a field too. It always has a great mix of stalls and inevitably there is always something that I want to bring home with me.

After the all-important, coffee and Pain au Chocolat in the Bar, I started to fuddle through the stalls, drawn in by beautiful old shop displays….

Rather taken by the old Tandem

And having to drag myself away from some pretty little cupboards, as no matter how much I liked them, there was absolutely no way that I could carry them back on the bike. There were some very pretty spoons for my business, but even the thought of carrying those in my back pocket all the way to L’Isle Sur La Sorgue and back didn’t fill me with enthusiasm. I did though decide that if they were there on the way back then I would be happy to carry them the last 25km home.

After a happy hour’s amble I pottered on to L’Isle Sur La Sorgue and the last day of the Antiques Art and You Fair, where stands are packed along the (closed) main road and fill the town centre park. I had already been on the opening day, so had picked up some pieces on then, but felt I needed a second look (just in case)
Once again there were some beautiful pieces, but I would have needed a large van rather than a bike to carry some of them home.

Instead I bought another coffee and then sat by the river with my hot feet in the cold water of the Sorgue…..

…..just taking a moment to cool down, take stock and watch the spectacle of the Nego Chin racing, where flat bottomed boats are punted up and down the weirs at a frantic pace, with the team members having to lie flat in the boats at times to prevent them knocking themselves out on the incredibly low bridges – so much excitement on Wednesday morning!

To be honest by that point I was just enjoying the day and decided to give up on serious ‘brocanting’ and to just enjoy the bike ride, taking the slow route back via the pretty village of Fontaine de Vaucluse (and another Pain au Chocolat)….

Then returning through the back roads to Les Beaumettes, where happily, the spoons were still on the stall and after a brief haggle I slipped them into my back pocket, clanking as I hit the bumps in the road all the way back to Apt, for a final effort to see if there was anything to tempt me at the Vide Grenier that was lining the streets of the old town there.

Cycling back up the steep hill to the house, I was grateful that the spoons had been my only purchase, as I struggle to get up at the best of times so any additional weight isn’t really needed.

All in all it had turned out to be a delightful ride, interspersed with my 2 other favourite activities, fuddling around brocante markets and enjoying coffee stops.

This pleasure was though tinged with the pain of having to walk past so many pieces that I would have been very happy to take home with me, either for the house or to use as display pieces for my jewellery.

The next time I do it though (and there will be a next time of course)……
I will just have to make sure I am with Andy and his trusty old black bike with the panniers that seem to have the same ability as Hermione Granger’s beaded handbag with its ‘undetectable extension charm’ or the ‘larger on the inside than the outside’ approach of Dr Who’s Tardis.

Who knows what we’ll be coming home with then ……. 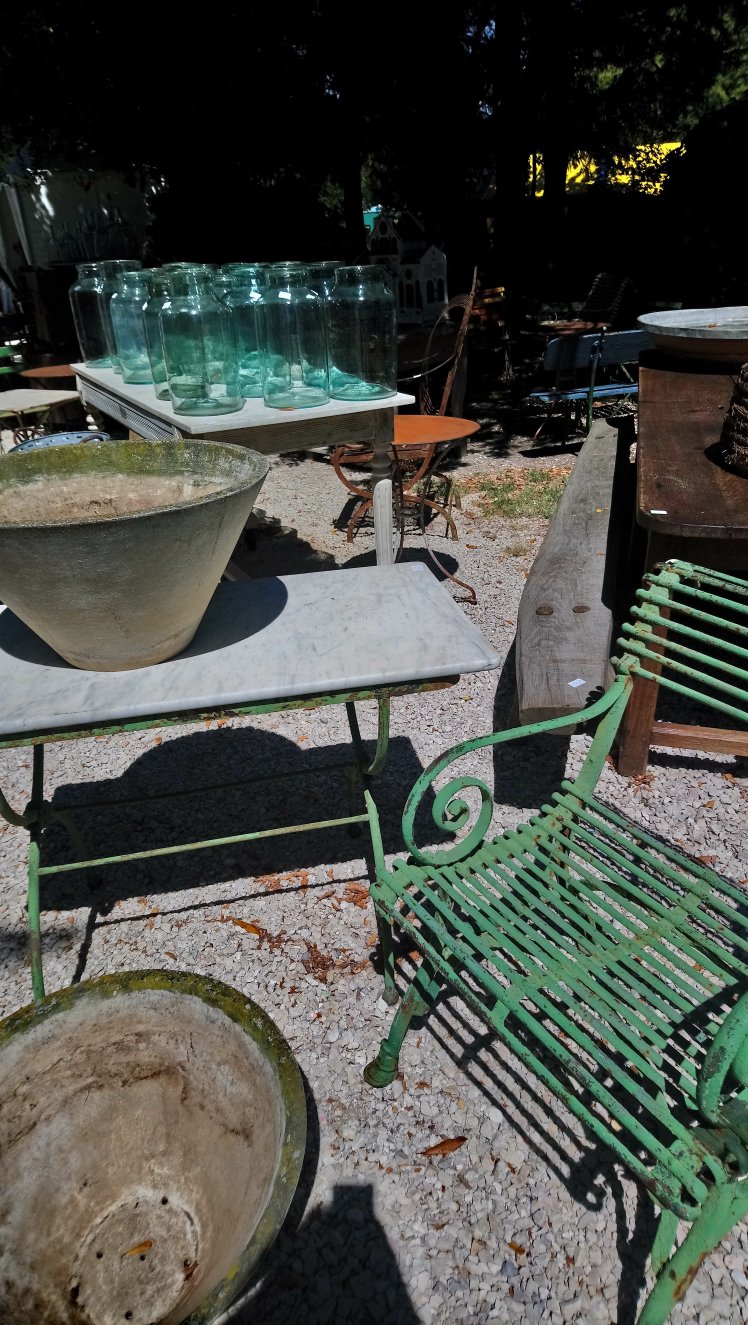