There is something about arriving in the Vaucluse that just makes the stress slip from our shoulders and today’s arrival in the depths of winter was no different.

Travelling at this time of year is a little bit more complicated than during the summer as at this time of year there are no flights from Bristol to Marseille or Nice (probably because the planes are being used for the lucrative ski-season) nor are there flights to Beziers, Montpellier of Nimes, so our travel options are a little limited. As such today saw me fly into Lyon, surrounded by fellow passengers wearing snow-boots and heavy jackets, whilst I was slightly less heavily dressed – even though the weather in Provence over the last few weeks has been freezing and even snowy at times! As we flew in today the tops of the hills to the north of Lyon were dusted with snow and the myriad of small lakes appeared to be frozen solid- I found myself thinking that perhaps I should have gone for the snow-boots as well!


Once in my hire car and heading south on the Autoroute du Soleil I started to relax, following the route through the Rhone Valley and the industrial landscape around Lyon & Valence before catching a first glimpse of Mont Ventoux, then crossing the Departmental & Regional boundaries into Vaucluse and Provence. Today Mont Ventoux was capped with snow and its summit shrouded with a stubborn cloud, but nonetheless I always feel that this is a sign we’re nearly back and it never fails to lift my spirit.
Today that was even more marked as I should have been doing the drive with Andy, but unfortunately one of our sons was too ill to leave so he had stayed at home with him, whilst I headed down to start my 50th birthday trip on my own! not exactly what had been planned, but necessary and at least we could be flexible…

After leaving the motorway the road from Avignon through the Luberon valley is lovely & the village names are now just marker-posts on our way back towards Apt. Gordes sitting in the hillside to the left & Oppede-Le-Vieux to the right, before passing Le Pont Julien and the villages of Lacoste & Bonnieux, which always seem to stare defiantly at each other across the strip of land that separates them.

Back at the house the first things I noticed were that the birds had been busy emptying the feeders of their food and (more importantly) that there was no water running from the doors or windows, which to be honest had been a worry knowing how cold it had been since Christmas – so happily the house had survived the worst of the cold-snap. When we’d been looking for a house we wanted to find one that would be easy to lock up and leave for periods of time, avoiding properties that had vast gardens, which could easily turn into wildernesses during an absence and become a chore to be dealt with on arrival – and from what I found when I turned up today I think our little place is just perfect.


Within 50 minutes of pulling into the drive I had not only managed to open the house up and light the fire, but had also got changed and was out in my bike for a short ride to blow away the cobwebs and get over the stresses of the day. I’m sure a nice sit down & a cup of tea would appeal to most people, but here the roads and views just draw you out and to be honest I can’t think of a nicer way to relax back into the area. It was also much milder than I’d expected, so it was a perfect afternoon to pop out for a few hours before it got dark.


Before taking a route past dormant lavender fields towards Bonnieux …..
Passing Lacoste with its dramatic, partially ruined Chateau, which was silhouettes beautifully against a rather stormy-looking sky this afternoon……
Along the road, which in the summer takes the bulk of the traffic that heads towards the village. At this time of year though it is a very quiet back road and perfect to cycle along…..
Once in Bonnieux I cycled into the main square, which is filled with a bustling local market on fridays, but today was peaceful and so I sat for a while overlooking the view that stretches from the village, across the valley towards Goult, Toussillon and of course, the ever-present Ventoux. I do love this view with its ever-changing colours from the purple smudges of lavender fields in June & July to the muted mid-winter browns and frys of today. It’s certainly a good place to sit and clear your head…….
From Bonnieux it’s a lovely sweeping run back down the old road through vineyards & Cherry orchards to Apt & back towards Caseneuve….
A couple of hours on the bike here and I feel fine again – all being well Andy will be able to join me for our promised few days later in the week, by which time the house will be warm & cosy again and we’ll just be able to enjoy a weekend of pottering around markets, Brocantes and of course covering a few miles on the bikes!

So after a worrying start to the day, I’m feeling much more relaxed now – further helped by much more positive updates from home – and so am looking forward to the next three weeks ………. starting with Brocante at L’Isle Sur La Sorgue & Carpentras tomorrow I think! 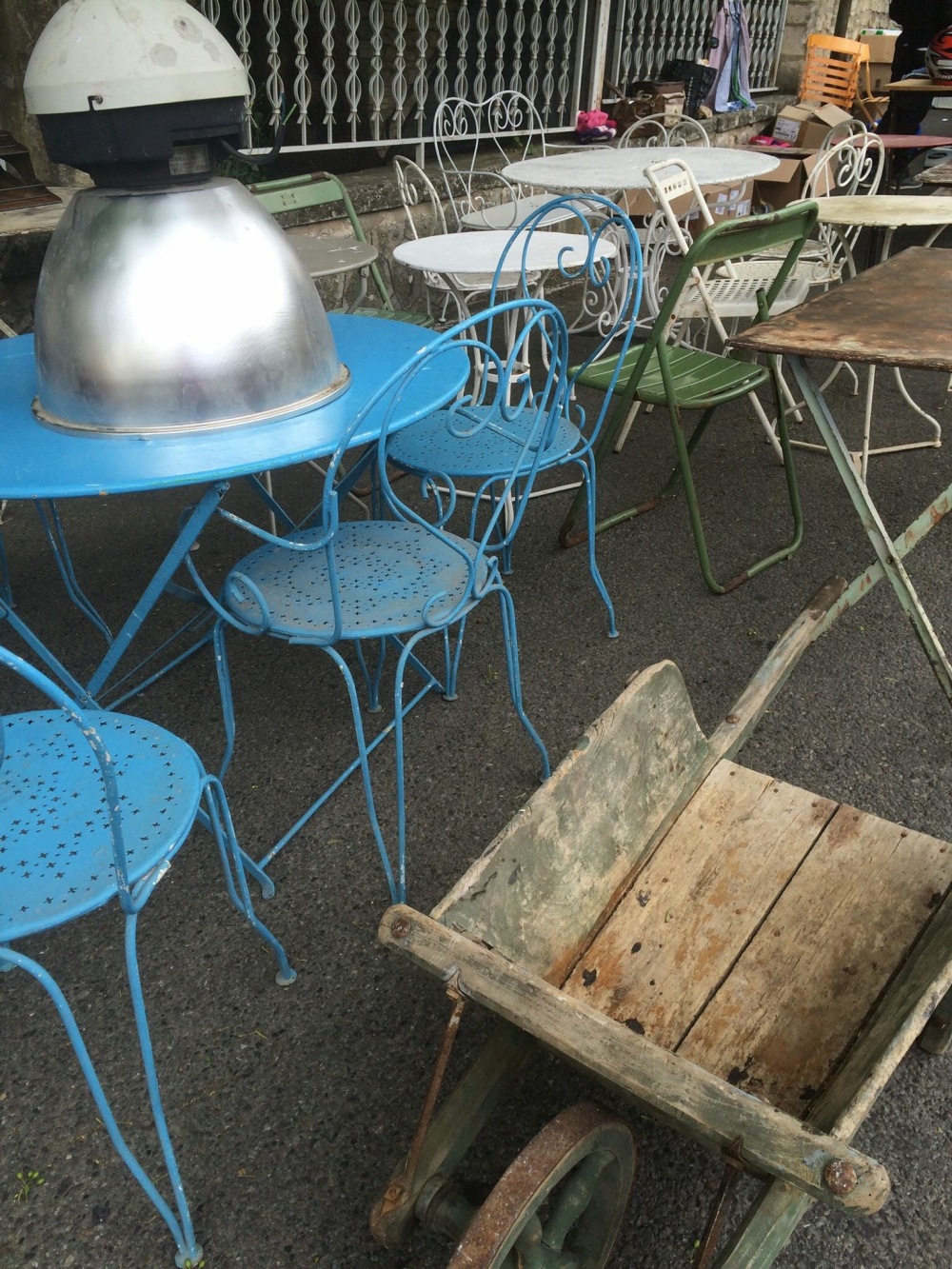