So boys how would you sum up today in 3 words? Vineyards, Cicadas, Bordeaux

Yesterday wasn’t the easiest of days and because of that the boys didn’t have the most relaxing day’s ride. Yet despite everything they had still managed to cover nearly 70 miles and had really broken the back of the journey between La Rochelle & Bordeaux before stopping last night.

All thoughts of a good night’s sleep though quickly went out of the window thanks to a Techno Party that was being held in the village hall. The music (if you can call it that?) was blasting out and despite their hopes that it would finish around midnight, the final beats faded out at 4.30 this morning so the boys had pretty much no sleep at all.

So this morning they were up early & back on the bikes, arriving at the Gironde Estuary by about 9 am, determined to reach Bordeaux by this evening.

The route they had chosen took them along quiet roads, passing through beautiful sunflower fields……

…….over peaceful waterways, lined with the wonderful fishing huts on stilts with nets that are winched into the water……. 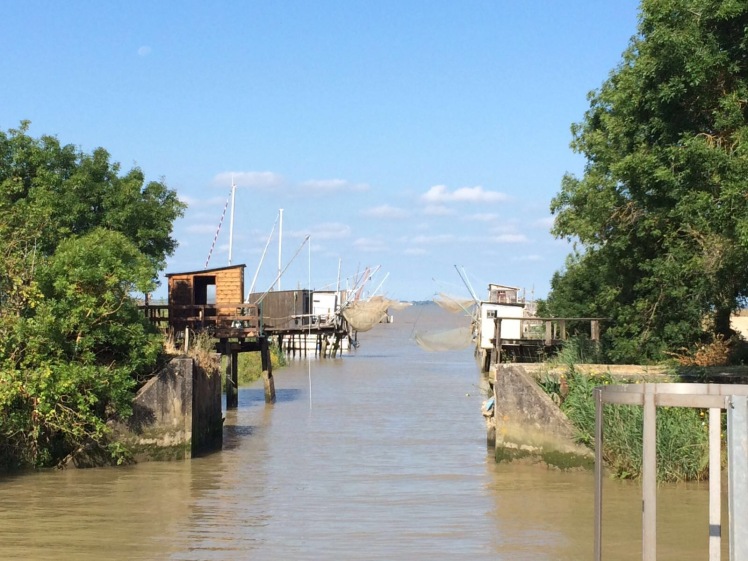 And through vast vineyards and pretty villages where the light coloured stone buildings radiated heat.

They managed to reach the estuary port of Blaye in good time and were able to cycle straight on to the ferry as they were loading the last few cars.

The crossing, which cost 13€ took about 25 minutes and deposited them safely on the South bank of the Gironde so they could continue on towards Bordeaux.

Once they had landed they stopped for something to eat in a small picnic area. Here they found themselves befriended by a scruffy little Wire-Haired Terrier, which managed to convince them it would starve to death if it didn’t get some ham. Needless to say after snaffling a bit of ham it happy went back to its owners on the other side of the park. A real con artist apparently!

Refreshed the boys headed on again, only to be brought to a grinding halt by another puncture, this time to Andy’s bike, so the trailer had to be detached & Tom got on with sorting the tyre out, ably assisted by George

Tom is now doing a great job just trying to nurse his bike through the trip. He is certainly frustrated that he isn’t able to carry his equipment, but his real responsibility now is just to keep his own bike going, hopefully all the way to Sete. After the problems with the spokes they are now using a spoke tightener regularly to deal with any that don’t sound right. When the ‘Genie’ worked on the bike in Brittany he said the spokes are right when they sing & so after a bit of tuning & making sure they have ‘singing’ spokes the wheel has been slightly better behaved today. 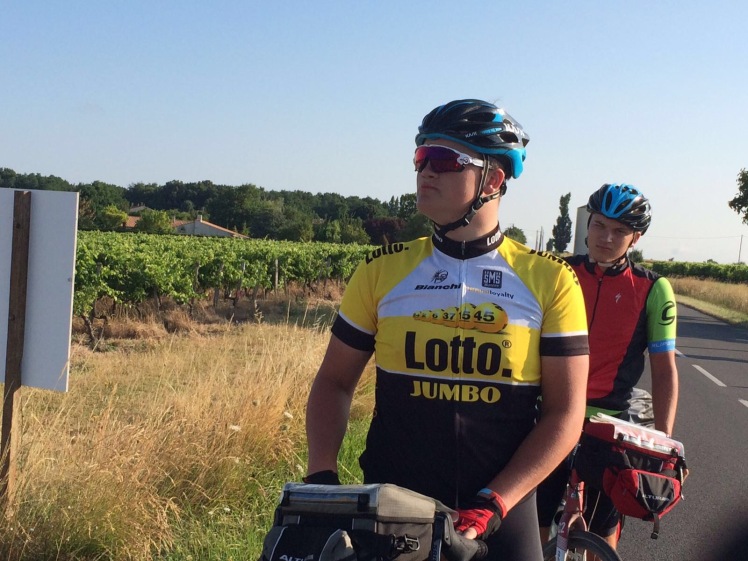 Having left the Velodyssey behind they started to pick up the signs for the next trail ‘Le Canal des 2 Mers’ , although they did comment that the signing was not as good and they occasionally list the trail, so resorted to following the route they had loaded into te Garmin.

After last night’s Techno Fest the boys were really tired today & so it’s amazing that they have managed to cover such a big distance. They did though need a good night’s sleep so put a call in again to the ‘Support Unit’ (pottering around the local Vide Grenier) to find a hotel in Bordeaux.

A room was booked for them at the  Quality Hotel http://www.qualityhotelbordeauxcentre.com/mb/&nbsp;

They finally rolled up there after a long day on the saddle just after 6pm, hot & sticky, but really happy to have reached the city, another big milestone on their route.

So hopefully there’s no big late-night events in the city tonight & they can get another good sleep, before heading out tomorrow morning & on towards the next big city – Toulouse. 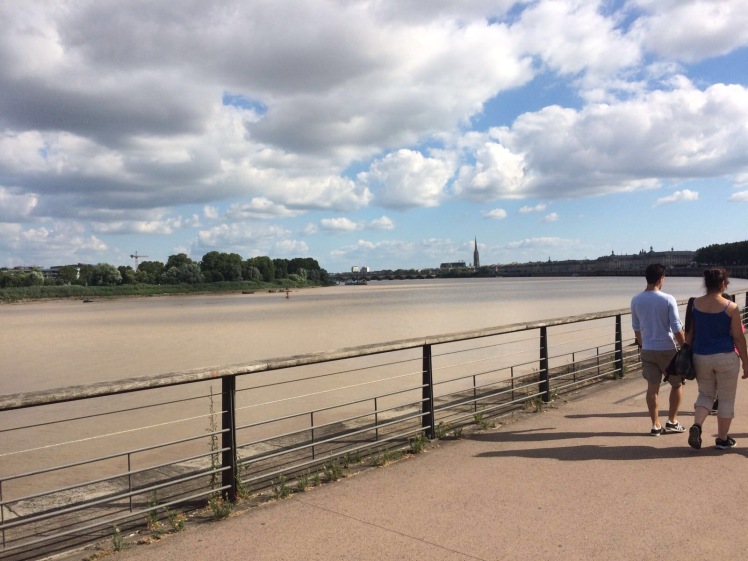 A peaceful end to a positive day ....
The calm at the end of the day....
The warm early morning light of summer in Bonnieux....
When even the bike rails love your coffee!