So boys how would you sum up today in 3 words? Mechanical, Puncture, Trailer

It turned out that La Rochelle was the perfect place for a stop with lots to do within easy walking distance of the hotel and a fantastic atmosphere & general buzz.

​​
But this morning saw them packed early & ready to go, heading back out onto the trail by 8.30 with the aim of getting a good day’s cycle in, on their way towards the next big milestone of the journey, Bordeaux.

BUT and yes it’s a bit but, within minutes of starting Tom’s rear wheel started to make worrying noises and it quickly became clear that the problem that he’d had on the second day in Brittany was happening again and something needed to be done quite urgently.


Since last Sunday’s trail-side repair the wheel has behaved itself and given no more cause for concern, but after a day’s rest it clearly was not happy getting going again, so an emergency call was made to the ‘Support Unit’ -(this time wandering around Apt Market) to try to find a bike shop that may be able to look at the wheel & do something.
A bike shop was duly found, but didn’t open till 10, so the frustrated boys had to go & have coffee (and we’ve seen how much Tom loves an espresso!) ….. whilst they watched the minutes tick by. There was a real concern that this wheel failure could result in the trip coming to a premature end, as bikes certainly need 2 fully functioning wheels. Andy’s biggest worry was that because Tom’s bike has      wheels, replacing them may not be as simple as first thought.

As the clock struck 10am the boys were already on the doorstep of the bike-shop for its advertised opening time, but it eventually opened its doors at 10.30! The boys were them told that the staff don’t really do repairs during July & August as they’re so busy with other things…… They really could have done with the trailside Genie from Brittany again!

What to do? Should they just plough on and run the risk of the wheel collapsing totally, just try a running repair themselves or the unthinkable & have to consider abandoning the trip?

After thinking about it for a few minutes the best choice seemed to be a running repair, but also to take as much weight as possible off Tom’s bike to reduce the stress on the wheel. This would mean removing the panniers, but Andy & George had no capacity to be able to carry the extra load in their bikes. This left one other option and so Andy bought a trailer.


We had considered whether to use a trailer rather than panniers when first planning the ride, but had decided against it as it makes the bike more unwieldy, but with the current circumstances it seemed like the best thing to do so one was purchased and fixed to Andy’s bike.

The boys quickly unloaded Tom’s bike & packed the trailer, for the onward trip and did what they could to tighten the spokes on Tom’s wheel.


They also rejigged their route and decided to avoid anything that could be an unmade track. Without any doubt the main problems to the wheel were caused in the first 2 days when they had been cycling along the rutted track along the Nantes-Brest canal, so the last thing they want to do is end up on trails like that again.

A couple of hours later than planned they finally got underway, listening nervously to the noises from Tom’s wheel & hoping for no catastrophic failure, hardly a relaxing ride, such a shame as the views were delightful


This wasn’t helped either when they found themselves mending the first puncture of the trip. I know it was always going to happen at some point, but it would have been nice if it could have waited another day or so!
By lunchtime though they had arrived in Rochefort and after a quick bite to eat headed on again,  hoping to make up some of the distance they felt they’d lost first thing this morning.
In fairness the boys put in a great shift during the afternoon and followed a route along quiet ‘white’ roads that cut them across country towards the Gironde Estuary.
Travelling on roads they were able to go 3 – 4 miles per hour quicker than on the trails & even with Andy now towing the trailer they had a good afternoon’s ride.

They enjoyed cycling through the Charente countryside, passing through pretty villages, before deciding to stop for the night on the Municipal Camping at Cozes http://camping-le-sorlut.com  (16€ for the night)

Tonight sees them sat on a bench waiting for Pizzas from the can that is in the street, tired but happy that even with the worries about Tom’s bike they’re still heading South.


The decision to cut across country was certainly the right thing to do as the quiet back-roads are good (hopefully reducing the potential for further damage to Tom’s wheel). Also the camp site is quieter than the ones they have encountered closer to the coast & its facilities get top marks from Andy for being clean & tidy.
So they’ve now left the Velodyssey behind & tomorrow start to track East towards Bordeaux, before turning towards Toulouse. Tom is now doing the ride on a bike that Andy says he ‘wouldn’t feel comfortable cycling on into Exeter’ 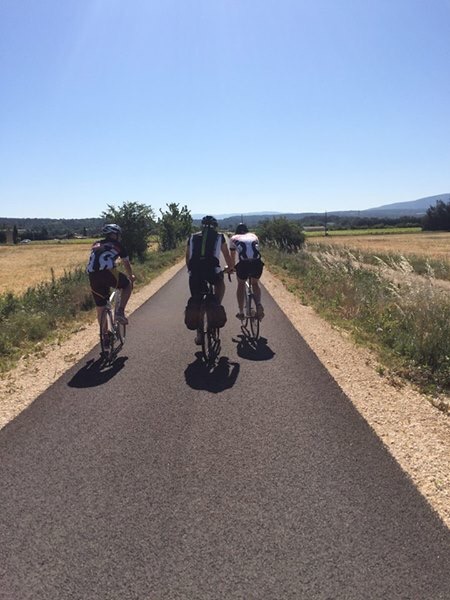