There are advantages to being a ‘morning-person’

Today was always going to involve an early start, but as ever we managed to wake before the alarm and were dressed in minutes, heading out of the hotel to walk to the Gare de Nord for the start of what will be Andy’s busiest travelling day yet.

Our plans this year have shifted, settled and shifted again shifting plans and today sees me heading directly to Provence, after a busy couple of days around antique markets hunting bits for my business that left us feeling a bit like this…. 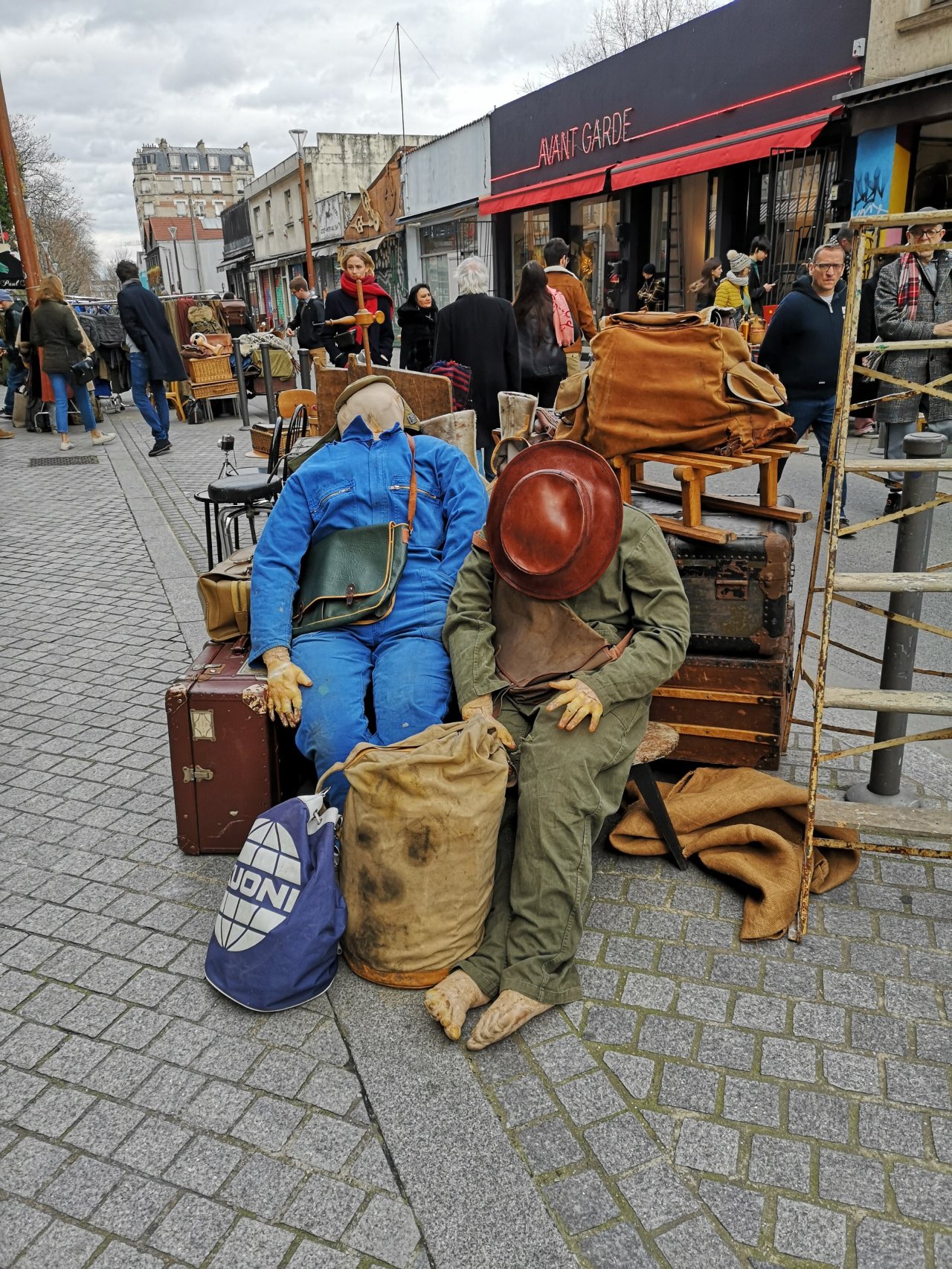 ..whilst Andy heads back to Exeter, collects the animals and a car full of bits (a cement mixer included) and then starts driving down overnight, before arriving (all being well) mid-afternoon tomorrow.

Even thinking about his journey scrambles my brain, but he set off this morning and as I start writing is about to arrive in Exeter at the end of the first stage of his trip, where he’ll go for a nice walk along the beach with our youngest.

Whenever he’s travelling separately, I worry, so tend to keep myself busy until he arrives. So after seeing him off at the Gare de Nord this morning I took a walk back to the hotel via Montmartre, which is so quiet and peaceful as it waits for the city to spark into life around it. 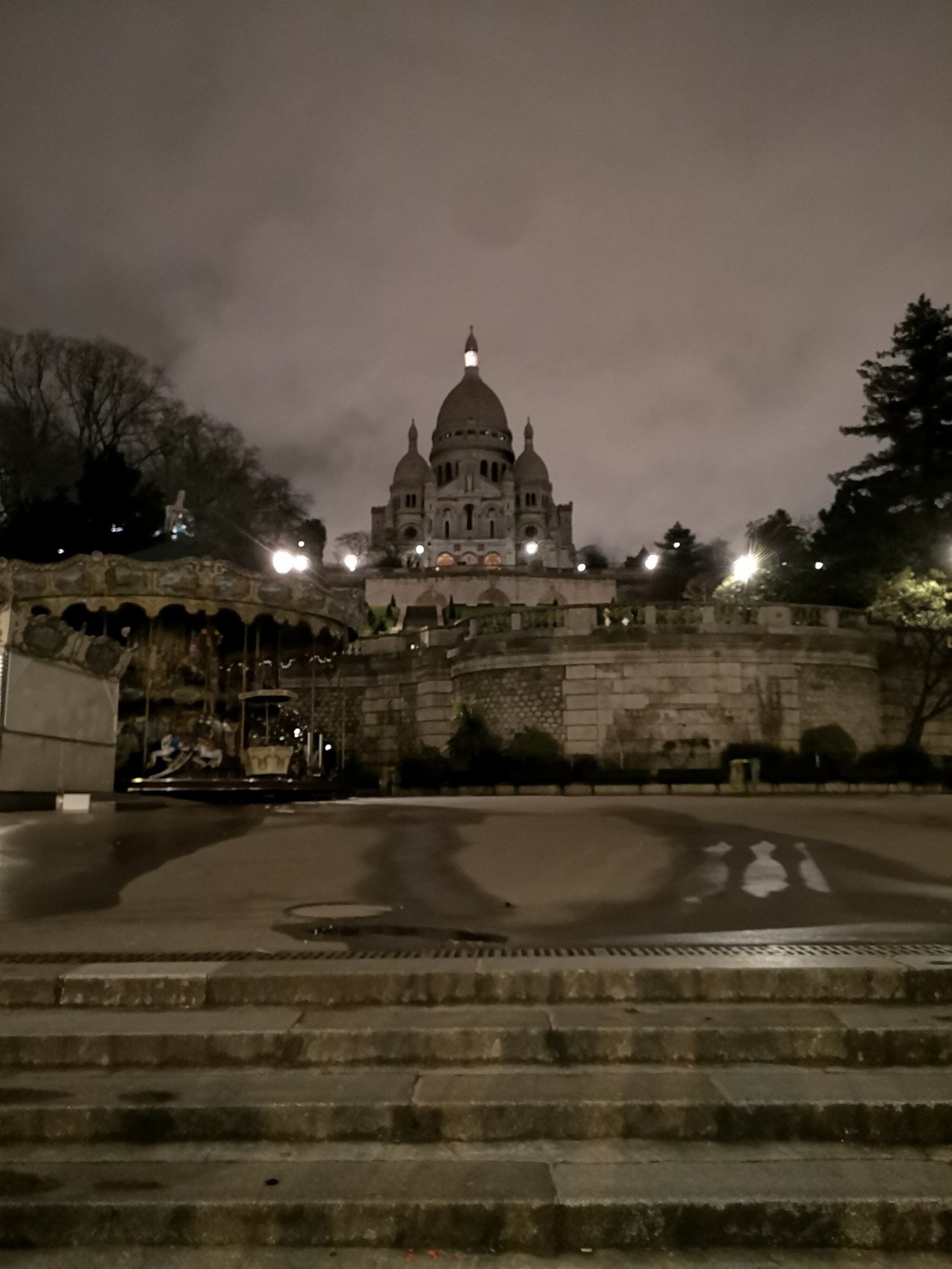 There is a simple joy in walking through a city before it wakes up, visiting the tourist spits, without the tourists and enjoying being able to stop and look at the little details that are so easily missed when it’s busy.

I appreciate that not everyone is a morning-person, but happily we would both rather be up with the lark than out in the evening when we’d much rather be curled up on the sofa with curtains drawn, happily asleep by 10pm. As such we don’t visit cities for their nightlife & restaurants, more our style are gentle early walks to cafés for breakfast instead. 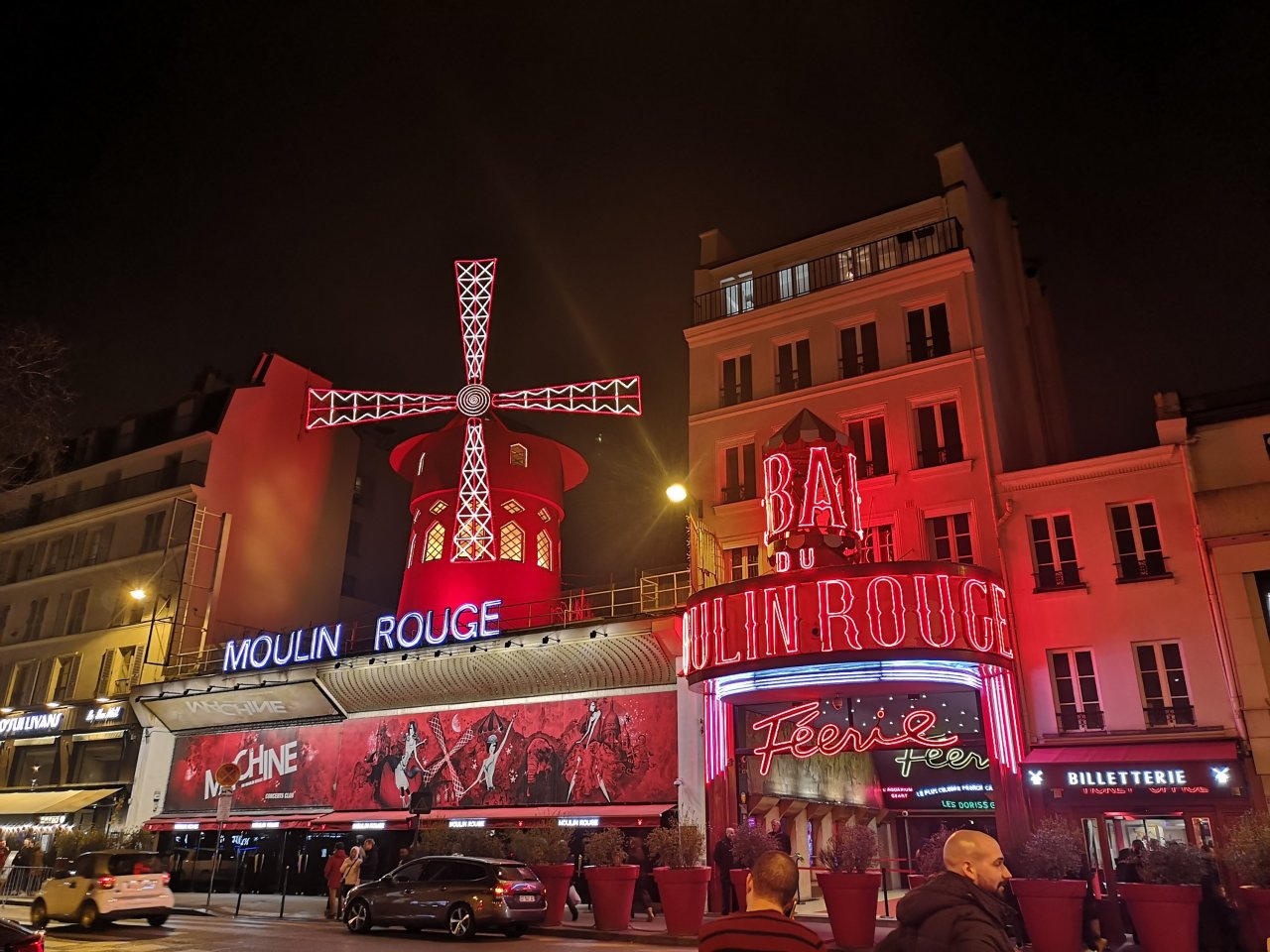 Happily the lights come on early at The Moulin Rouge

This morning took me to the foot of Montmartre, where I was faced with the choice of using the Funicular for the journey up or taking the steps that run alongside. Needless to say the steps won and over 250 steps later I arrived (well-exercised) at the viewpoint below the spectacular Sacré Cœur.

When we walked through early one morning last summer the steps outside were busy with people watching the dawn across the city, with broken bottles around them after a night drinking. This morning though was totally peaceful, I really was the only person there, no broken glass under my feet just the birds starting to sing and the last of the storm clouds giving the city a dramatic backdrop.

After standing watching the sky for a while I noticed that Sacré Cœur was open and never having been in, thought I’d seize the moment to take a look inside. It’s celebrating its Jubilee this year and is open every day for anyone to visit until October. 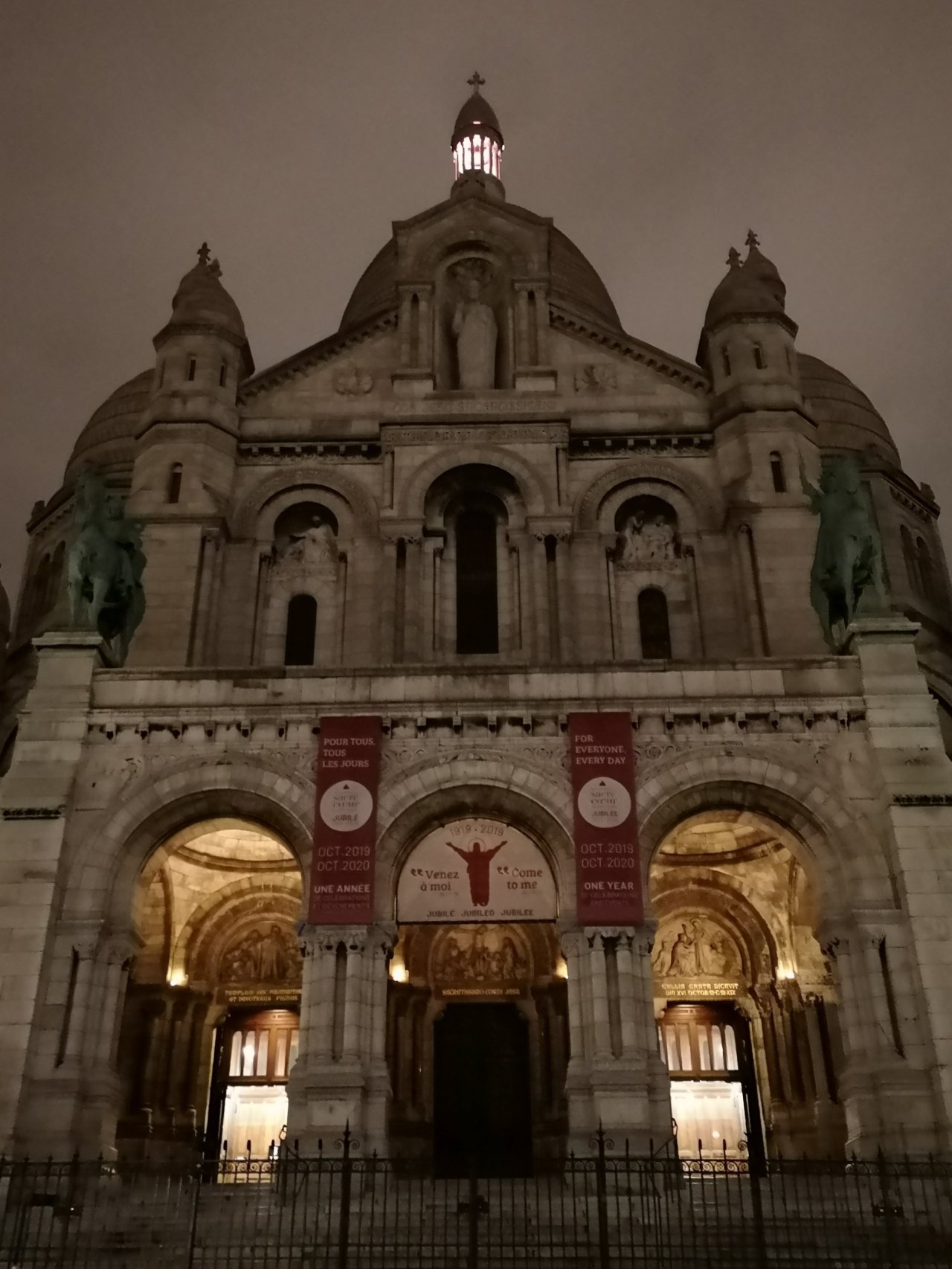 It’s hard to believe that this magnificent building, which is one of the first things that comes to mind when you think of Paris, is only just celebrating its 100th birthday. I can’t imagine the skyline without it, but there are people still alive who were around before it was finished and consecrated. 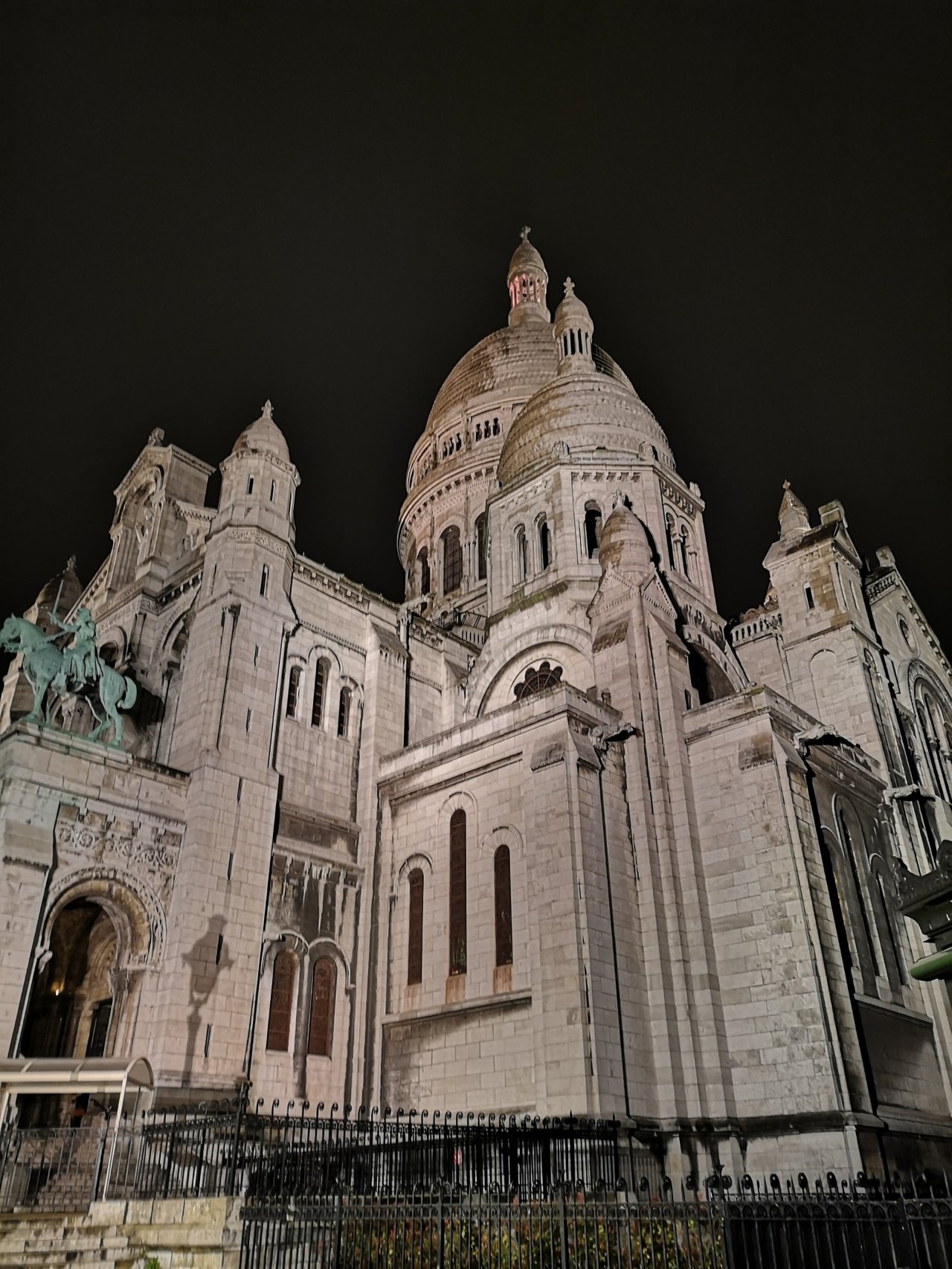 Before 7 this morning it was so quiet and the sheer scale of the interior was clear to see in the subdued light when there was just a handful of people sitting silently in the pews. Predominantly beautifully sculpted stonework there are incredible mosaics in the domes ceilings over the altars. 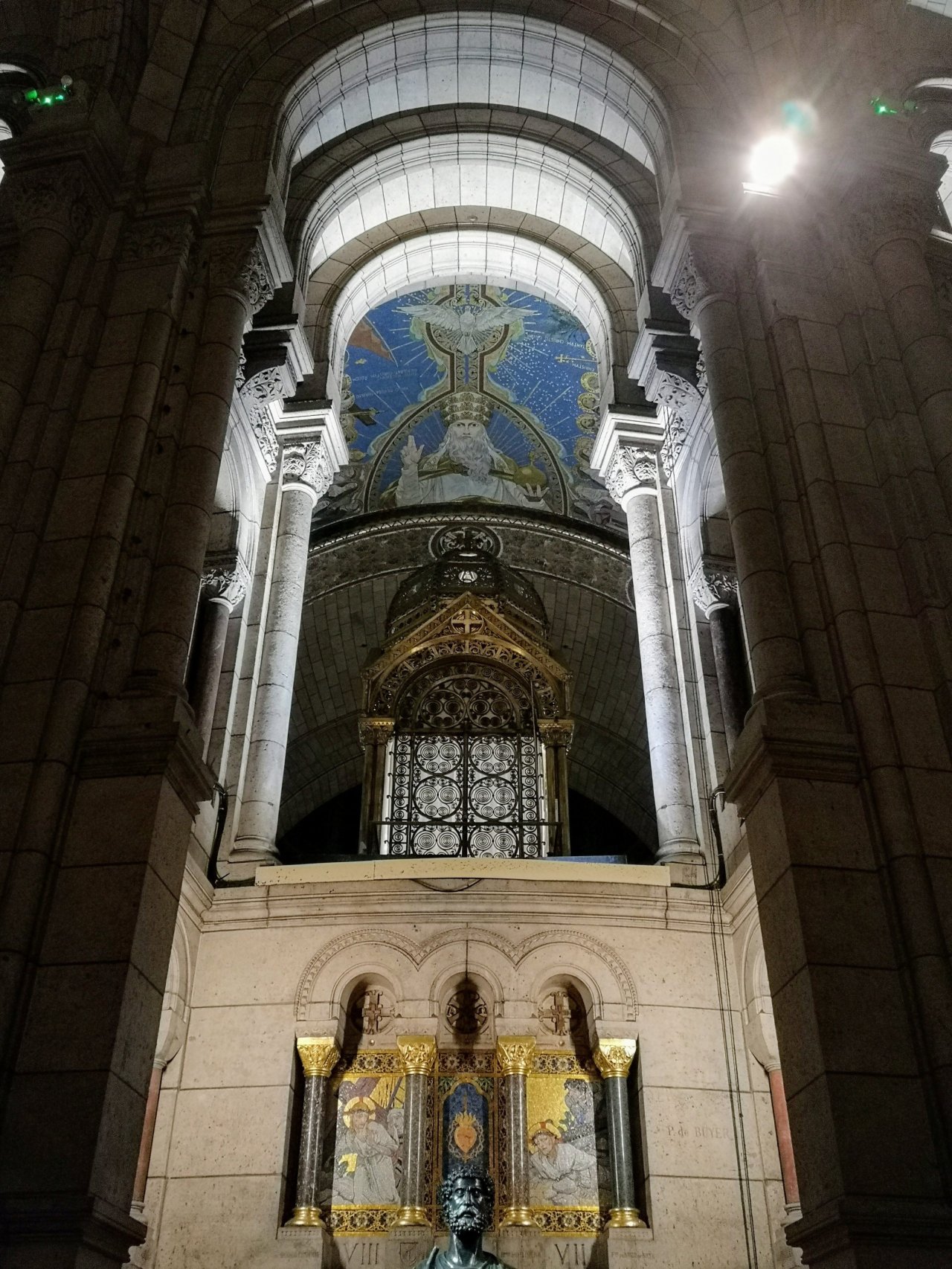 Vivid colours in the mosaics

It is a beautiful, simple and very tranquil space and I’m happy I took my chance for a visit when it was so quiet.

From there I wandered back through Montmartre, through the Place du Tertre, so different without the bustle of the day.

Place du Tertre in the rain last night..not a soul to be seen this morning

I’d never noticed before a small sign in the square celebrating the start of the French Car Industry when, on Christmas Eve 1898, Louis Renault first succeeded in driving a car he had built up the hill to the square. Its amazing how much has changed in the last 122 years…

The start of the French Car Industry

Then down the street, so quiet without the shops spilling onto the street selling all sorts of souvenirs into the late evening and past Le Consultat, à bistro that has been that haunt of famous artists from Van Gogh to Picasso amongst others….

So much nicer at this time of day

And back to the hotel, arriving back just after 7am still before the other guests were up.

With Andy well on his way I grabbed my rucksack, which weighed a considerable amount more than it did before yesterday’s trip to Clignancourt and set off on my own trip across Paris to the Gare de Lyon for my journey South. 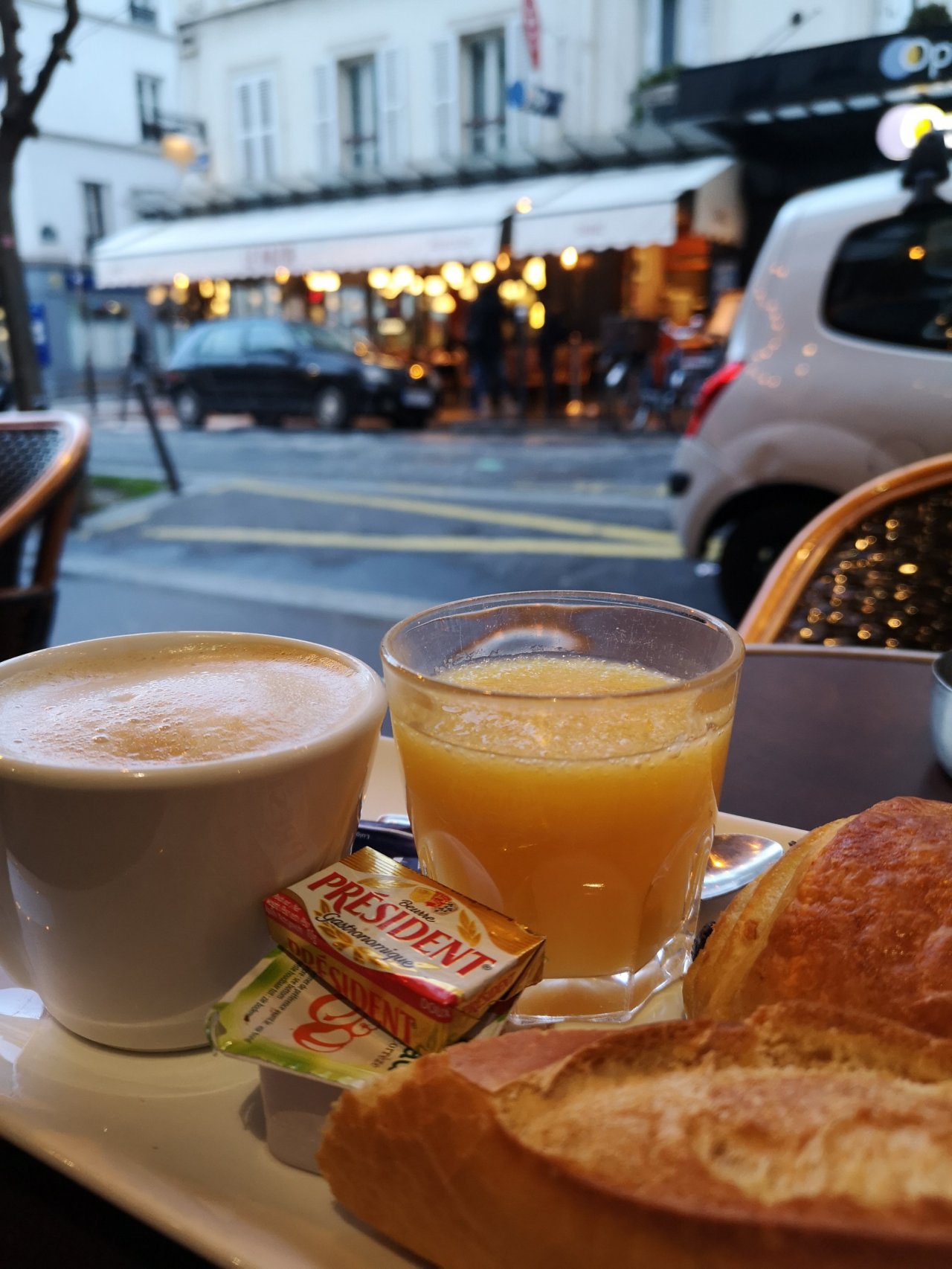 After breakfast (which to be honest I felt I had earned) I headed off through the city. The last time I had walked I’d been in a bit of a rush and hadn’t had the luxury of time to take a good look around me as I dashed through my last trip through Paris

Today though I could take my time, initially thinking I would walk some of the way before jumping on the Metro, but quickly realising the clouds had cleared and I had the time to amble (with the chance to rest when the backpack started feeling too heavy). So I walked, passing incredibly beautiful buildings…. 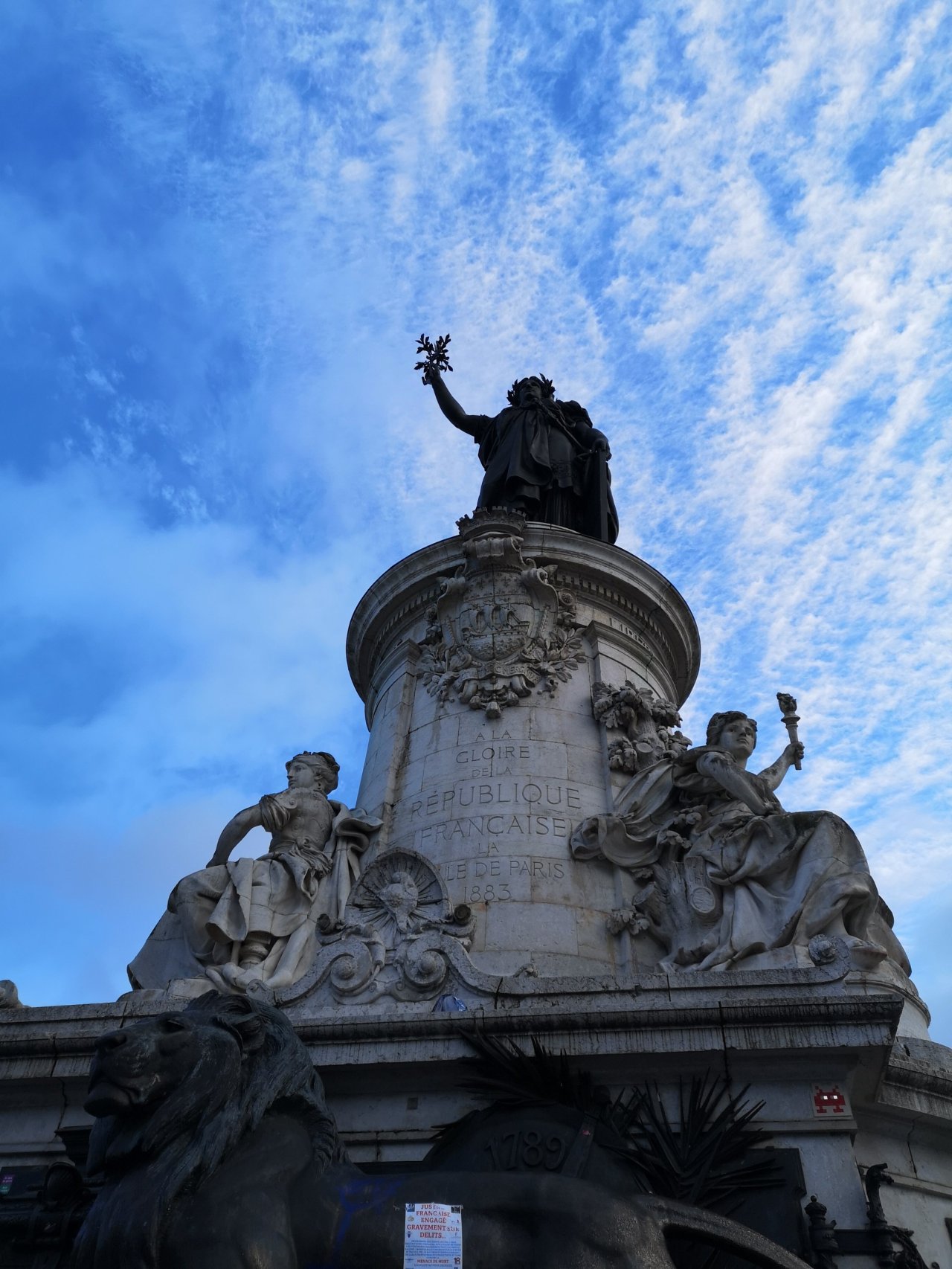 Marianne resplendent against the blue sky

And on again to the Place de la Bastille, cleared now after the works that were taking place when I last passed through…

From here it’s a short distance to the Gare de Lyon and I even had time to take a better look at the pretty houses of Rue Cremieux, painted in the colours of sugared almonds…

Sugared Almonds in house form near the Gare de Lyon

And stop for a final coffee before catching the train and a very welcome sit down on the straight through TGV to Avignon.

A final coffee before the train

The road is now the beach in Exmouth

Before he starts the next stage of his trip tonight. All being well he’ll arrive mid-afternoon tomorrow so I just need to keep myself busy till then as I know I won’t be happy until I hear the car pull up outside.

For now though I’ll just sit back and watch France hurtle past outside.