Beating the January Blues in Provence

I have to start by saying that I really dislike January. I know it’s a a quiet time of year after the excesses of Christmas and a time for looking forward to the year ahead, also my birthday happens to fall within it too, but I still find it the most depressing of months. Despite us having passed the shortest day, the sun still sets early and some days it never seems to get light at all, any resolutions made as the year turns, go from being passionately upheld to something that ‘I really want to do if I have the time’ and still summer seems such a long way off.

We’re lucky having the estuary paths so close by, but it isn’t like cycling in Provence

I am also pretty useless in England. If the weather isn’t good I don’t cycle and even if it is nice enough to venture out, the rides are relatively short and tend to be relatively flat too, as I stick to the local cycle path along the estuary as I really don’t enjoy cycling on the roads around us in Devon, which is ridiculous I know

On the positive side though, we do have the opportunity to escape to Provence now and after 12 weeks back in England committed with Craft Fairs in the run up to Christmas (the longest single period, since we bought the house) I leaped at the chance of a trip back in early January, just to get a much-needed fix of Provence and potter my way through a couple of weeks doing the things I enjoy… including cycling.

The run up to Christmas was busy with Fairs, but fun too

Since arriving a couple of days ago, the days have been stunning, it is almost as if the weather knew I needed days of sun and bright blue skies, just to start recharging my batteries. So yesterday I hopped on the bike and headed off for a little ride around a few of my favourite spots.

When the sunrise is like this.. It’s going to be a nice day

I say hopped on the bike, but it isn’t quite that simple at this time of year, as with the bright blue skies come piercingly cold temperatures, meaning that early-morning cycling involves having to wear layers of clothing more widely associated with skiing than a cycle-ride. I am sure it would be prudent to wait until the sun has come up and warmed the air a little before heading off, but I am an early-morning person and after so many weeks of near inactivity there was no way that I would be able to wait to head out.

It was worth the effort and at times it was a real effort after so many weeks of only occasionally turning the pedals. It has to be said that I did rather feel like a snail on the bike, but at least I was a snail with a grin and very quickly it felt as if I hadn’t been away for more than a few days.

When the weather is like this in January, it is perfect for cycling and to be honest any other activity too (apart from a spot of outdoor swimming). Yes, you need the right clothing, especially as you quickly realise the really cold spots hidden from the low sun by The Luberon or high trees that seem to have a permanent layer of frost on the ground …..

Heavy frost under the trees at Pont Julien

…..but as the day warms up the layers come off and by early afternoon it has felt almost spring-like.

Off come the layers in the afternoon sun

The joy of being out on the bike on days like these is that you have the roads almost to yourself….

The peace too is overwhelming, especially away from the main roads, where all that can be heard is the gentle birdsong or distant clanking of sheep bells and occasionally the subtle ‘pfft’ of hydraulic pruning shears that are being used to trim the vines ready for the year ahead. 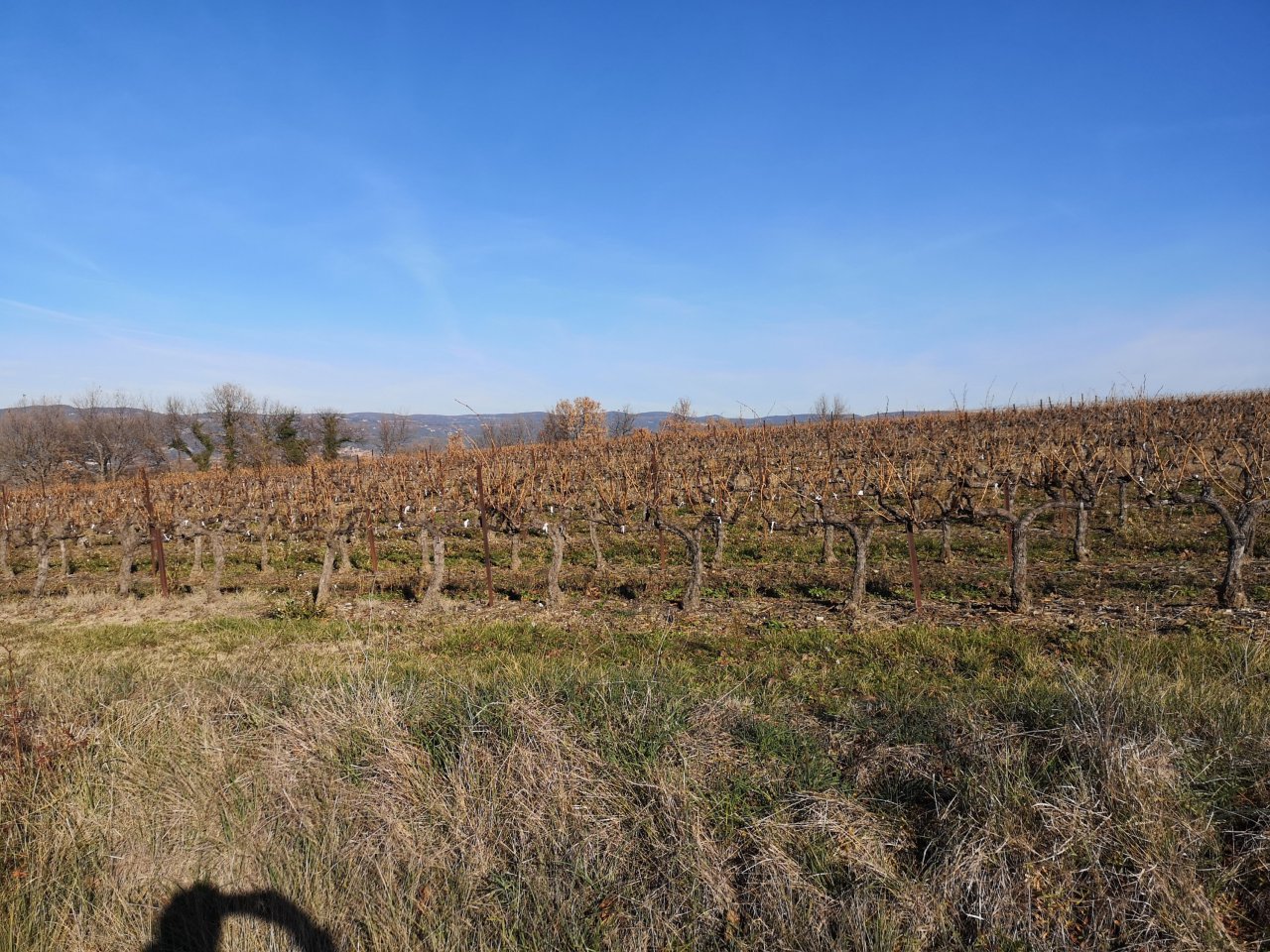 The light too is incredible. I know the light here has always been a draw for artists, but in the summer it can be hazy with the heat, whereas at the moment the air is crystal clear and the views seem much more defined, such as today when I could see every fold and contour on the Grand Luberon and even snow-capped mountains in the very far distance from the viewpoint at Gordes.

My happy place… The view back down the Valley from Gordes

This clarity of light brings with it vivid colours in the fields and hedgerows. There is a real golden quality to the vegetation at the moment, helped by the fact that (bizarrely) the Oak trees hold onto their autumn leaves until the new ones start to emerge, so all the roads are edged with orange-tinted light filtering through the dead, but bright leaves 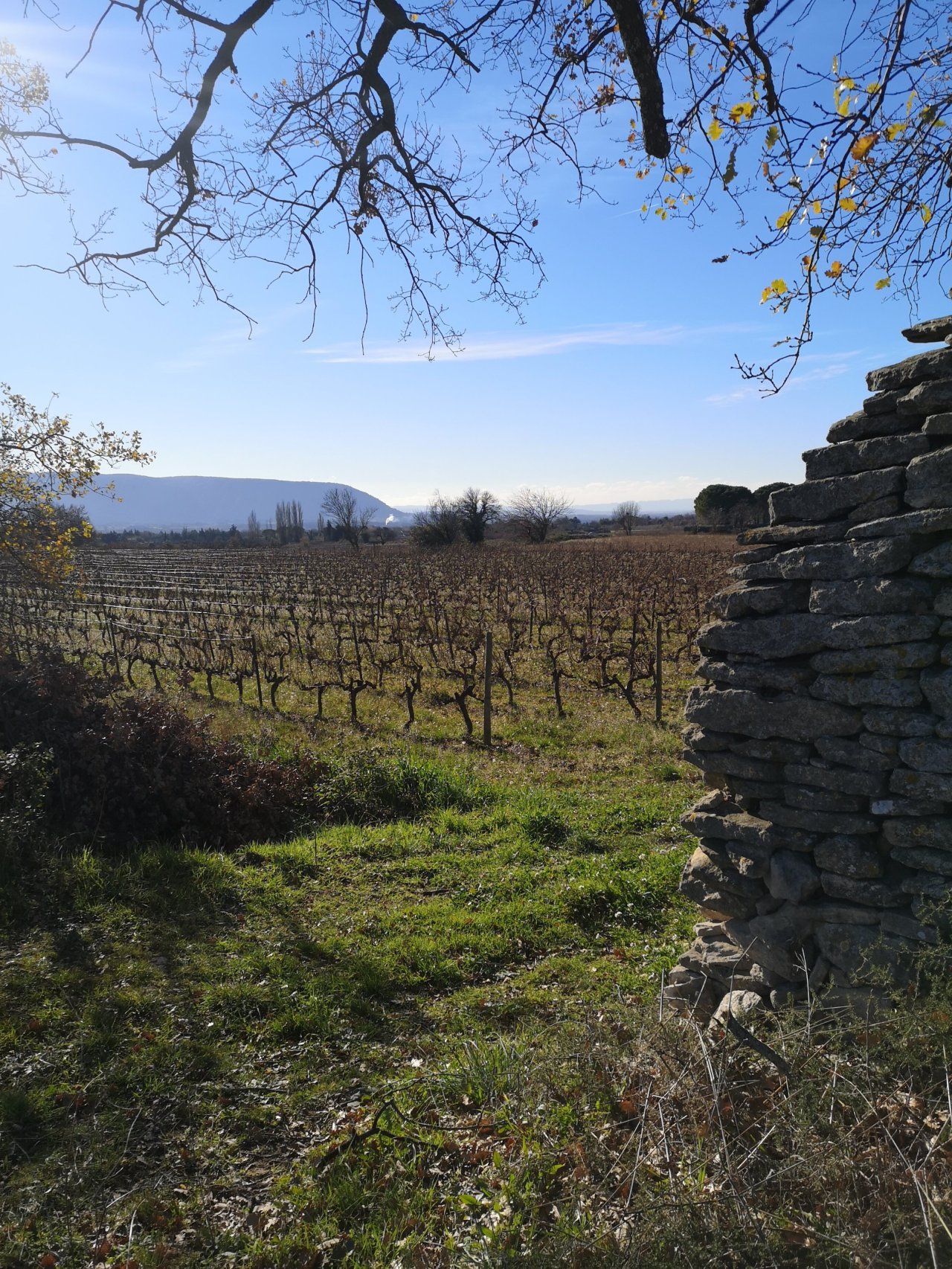 The lack of vegetation also means it is easier to see some of the other sights, sometimes hidden by plants, such as these beautiful old stone bories just off the cycle path on the way up to Gordes.

All in all the last couple of days have been just about perfect and I’ve pottered around the valley visiting my favourite spots ….. 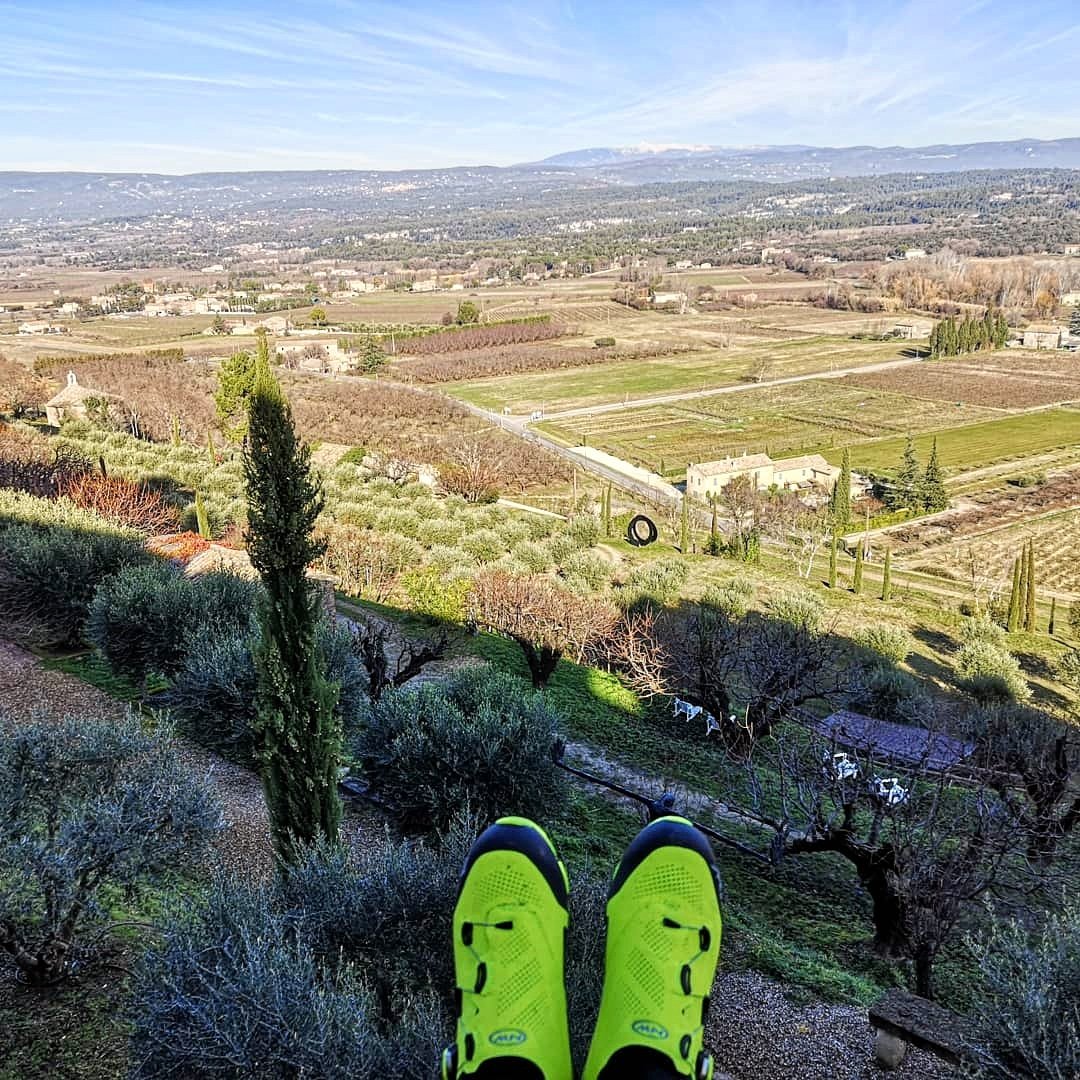 The wall at Menerbes… Unusually in the shade

Settling back into my croissant-chasing habits … 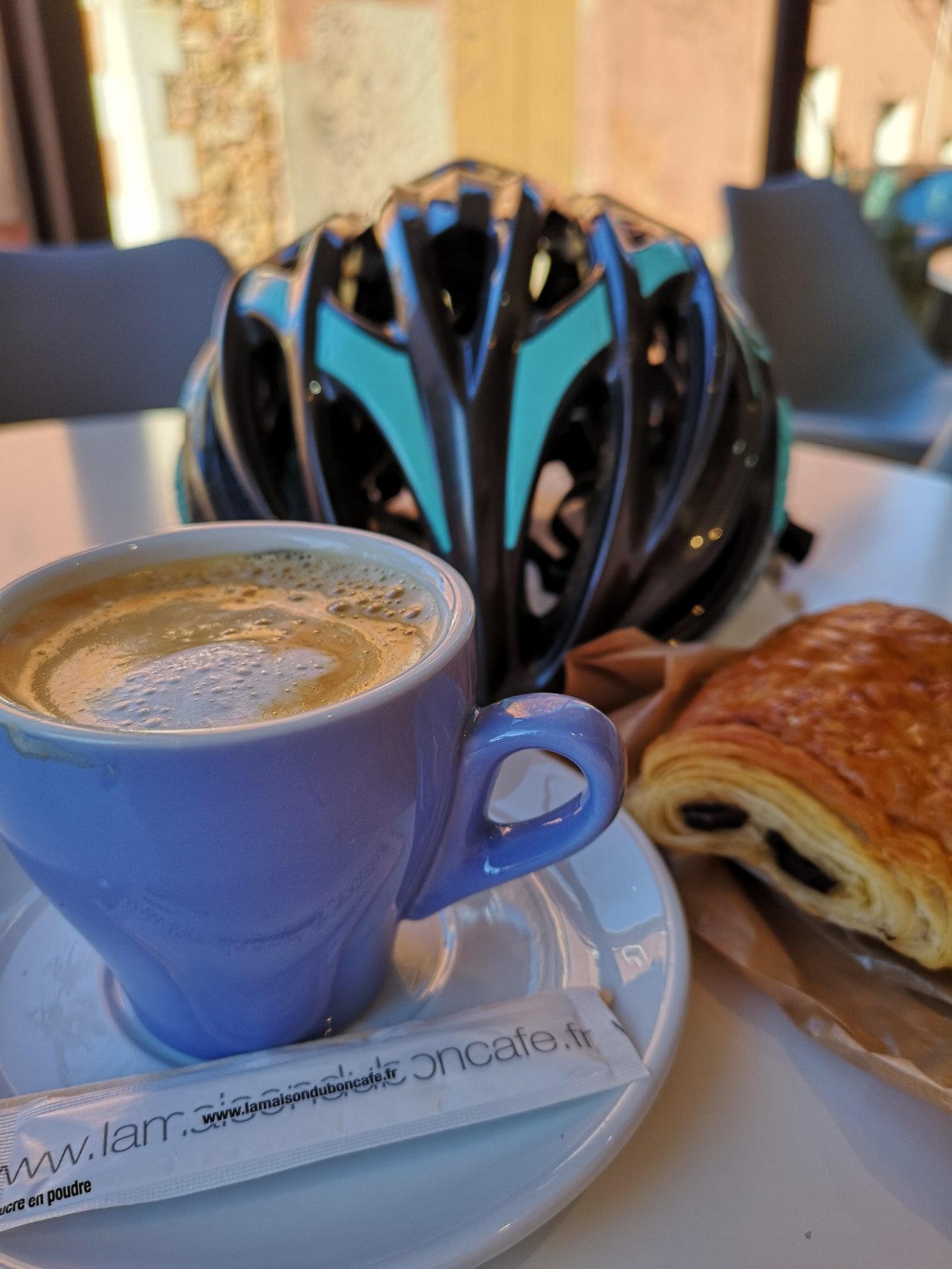 And simply enjoying the sense of being part of the area just by being on the bike and experiencing the little things that are so easily missed if you just drive from A to B in a car, including the bees busy on the early-season sweet-scented flowers growing amongst the vines and in the verges…

I think the only thing that had surprised me is the amount of lying water, still around after the dramatic floods that hit the area on 3 occasions just before Christmas. The area has been hit by droughts over the last few years and any water has quickly disappeared into the ground. However the rivers are flowing, the roadside culverts are full and near Cabrières D’Avignon I had to cycle through a Ford… 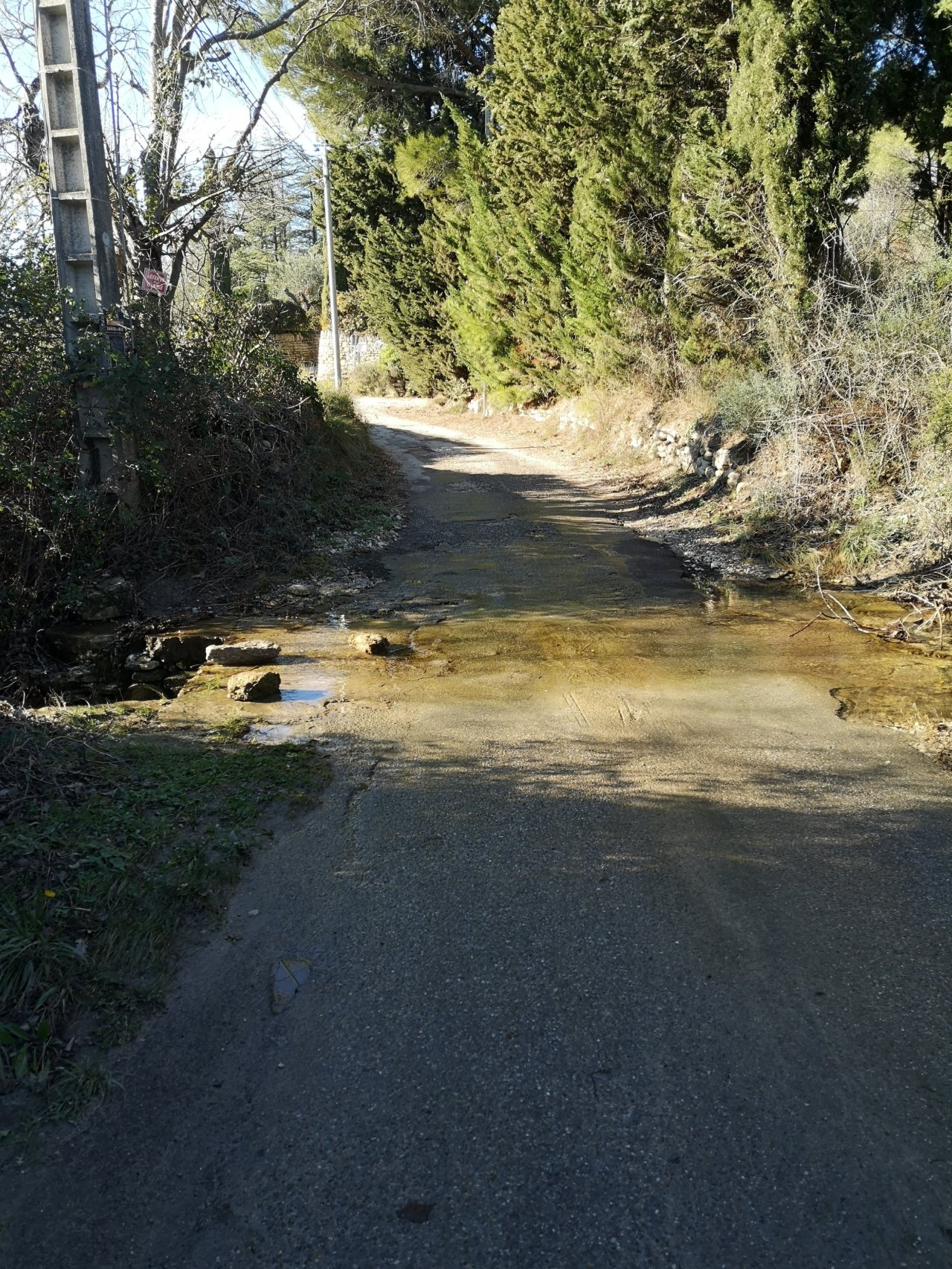 Fording a stream on the road near Cabrières

Also the source of the Sorgue at Fontaine de Vaucluse is in full flow, dashing out over the rocks with incredible force, power and noise….. 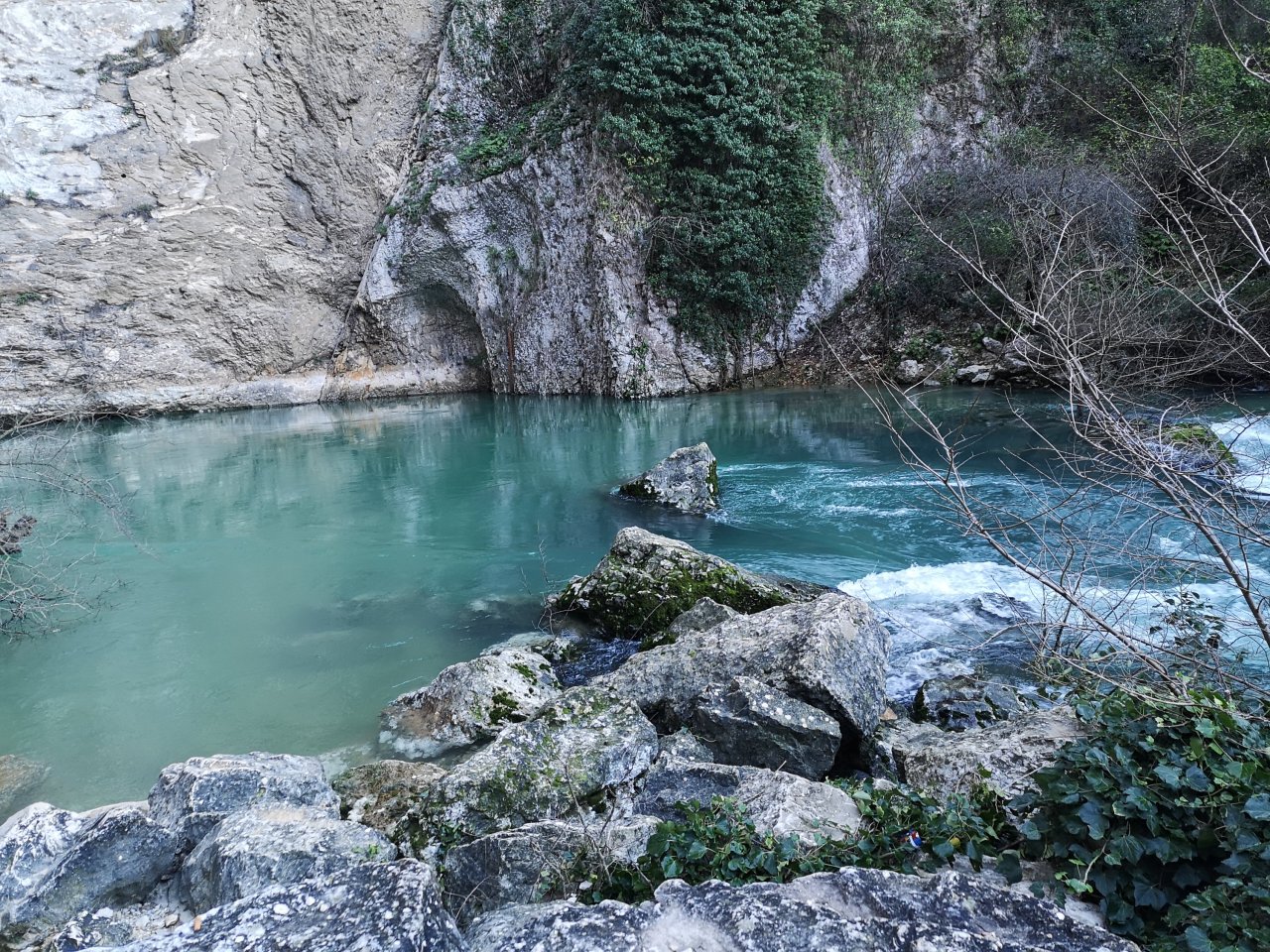 The source of the Sorgue in full flow

… A far cry from the small pool, far below the rocks that we normally see in the summer…

A bit fuller than in summer

I know January may not be my favourite month, but at least here I can make the most of whatever the day brings. There is always something to do and after the last couple of days if it’s raining tomorrow (as predicted) I won’t mind hopping in the car and pottering over to Lourmarin for the Friday Market, or fuddling around the brocante markets at the weekend….

Days on the bike charge my batteries

The simple fact is there is always something to do here that helps me chase away the blues that come with the dreadful drudge that is January …. 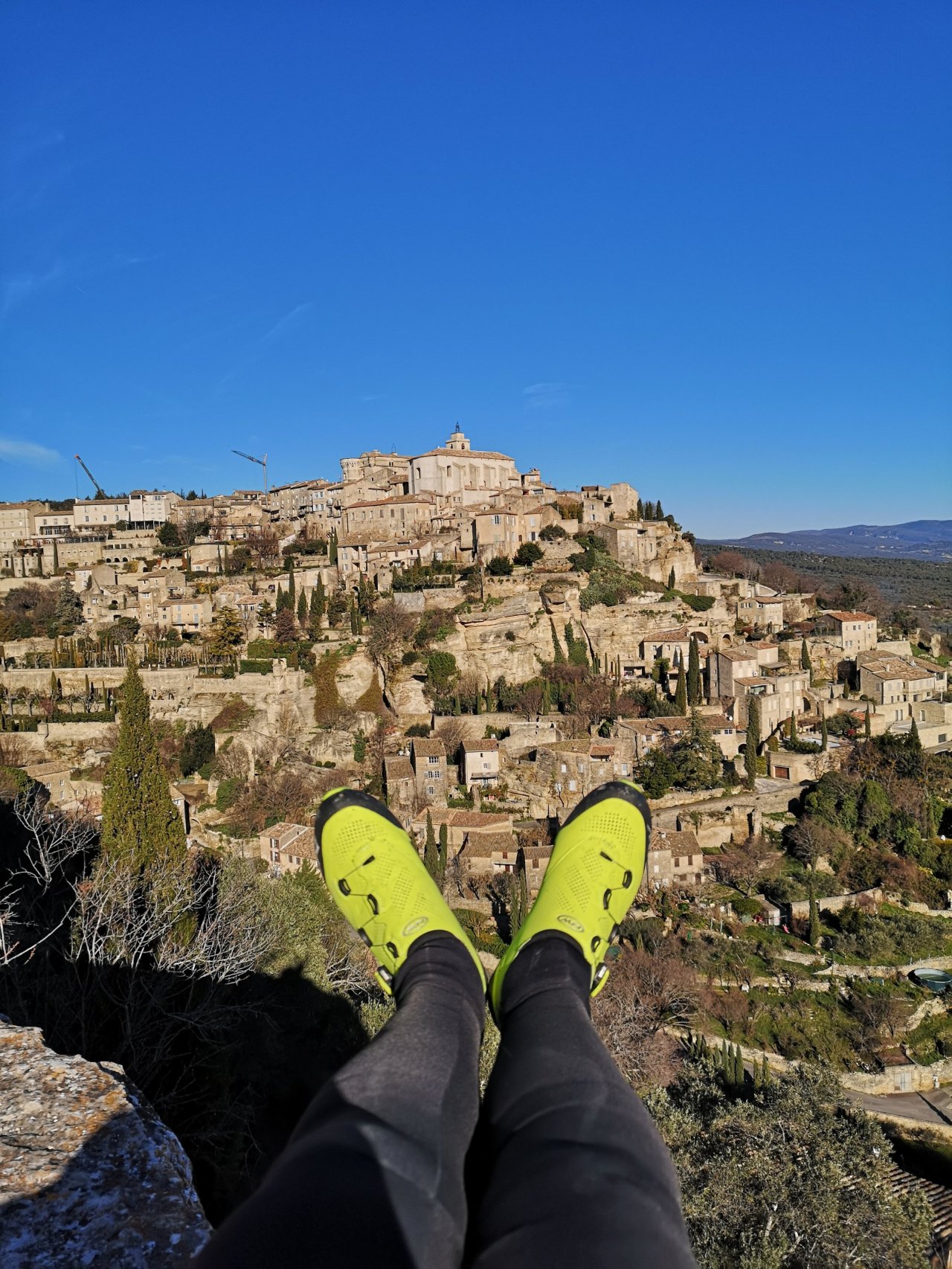 I’ll take any January day like this…. Happy Feet at Gordes

Whilst I think about it I really should put it in the diary for next year too.