So boys how would you sum up today in 3 words?….. Cooler, Sea, Progress

Yesterday’s crossing of the Loire was really the first big milestone for the boys and to have got there by lunchtime on day 4 was quite an achievement.

The biggest problem for them though was the lack of sleep & the extreme heat – cycling in 40 degrees is certainly not easy, especially when you have fully laden bikes too.

The other problem with fully-laden bikes is how best to park them – oh for kick-stands!

The decision to head for a hotel last night proved to be the right one, even taking into consideration Tom’s dice with death on the way

Although the hotel was basically a truck-stop it was clean, comfortable and cool. http://www.hotel-chevalblanc-machecoul.fr/.   The other thing about it being a favourite with lorry drivers is that it has a good restaurant and although the view wasn’t exactly stunning, the food was great and their fellow diners very chatty – although Andy said it was the first time he’s eaten in a restaurant full of men!

They managed to have a 3 course meal with 1/4 litre of wine (Andy felt it his daddy duty to drink the boys’) for €11.90 each. Incredible value & described as the best meal they’ve had so far.

So they woke this morning much more refreshed after the hoped-for good night’s sleep, took advantage of the hotel’s great breakfast (first coffee in 3 days) and hopped back on their bikes…….. Well I say hopped on, but I understand getting back on the bikes is not the easiest of tasks – Tom describes it as like climbing Everest & having to get to base-camp first, before heading up to the summit! 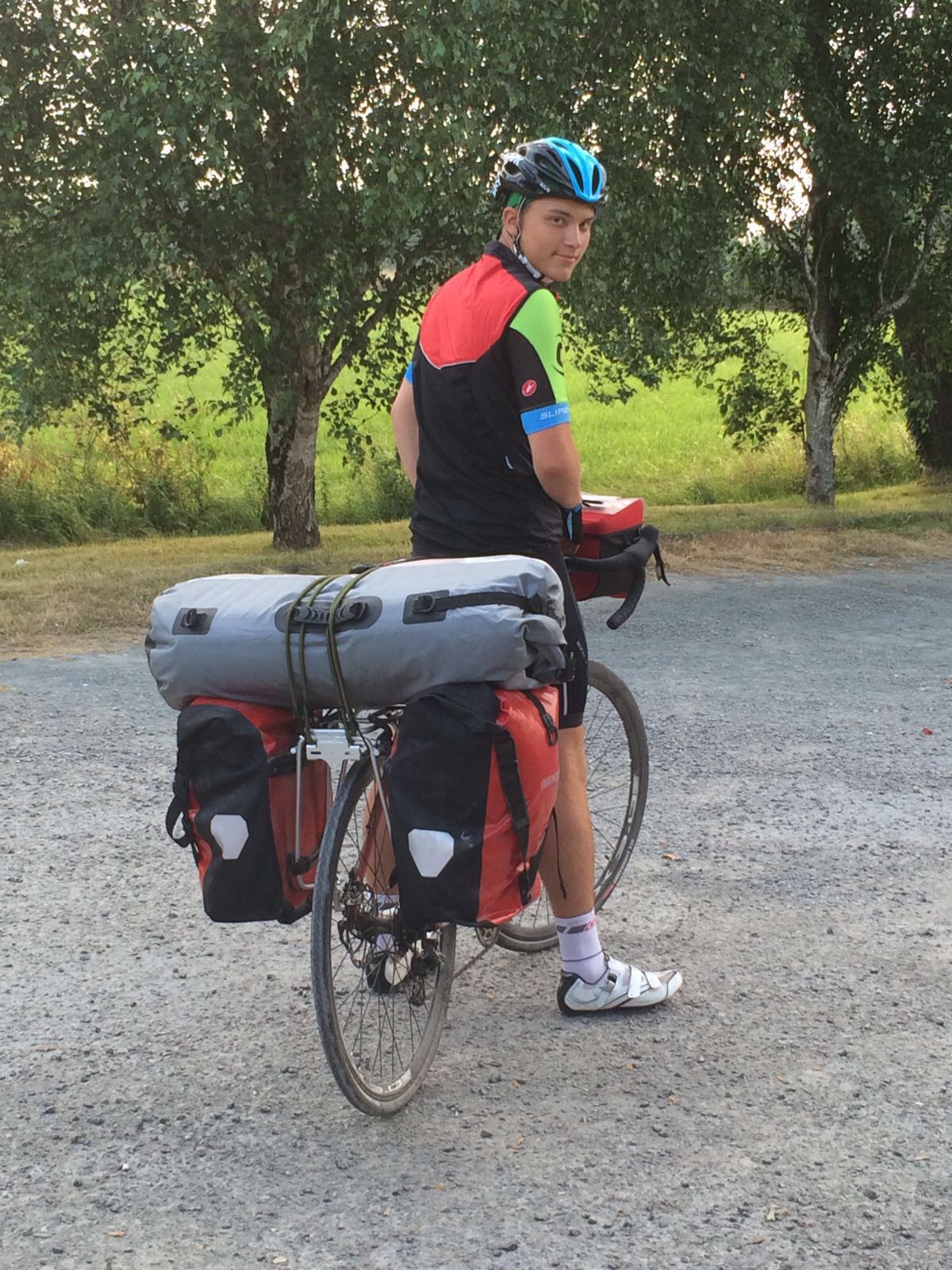 George showing the final position, all ready to go!

…….. once settled they were able to start pedalling again & make their way onto the route they had decided on last night.

They quickly moved onto the wonderfully quiet & empty back roads and started heading back to rejoin their planned route.

The sheer joy of cycling along empty back roads

The day was overcast and at least 15 degrees cooler, which made for much more comfortable cycling & they soon got into their stride, covering 32 miles and getting their first glimpse of the Vendee coast before lunch.

Back on the trail & taking a moment to enjoy the view

Crossing the border again they quickly noticed changes in the way the area was set up, with much better signage & information along the route, this is becoming an interesting aspect of the route down, noticing the changes from Department to Department.

The Vendée have really got it right with their signs

The trail was in much better condition, with a solid base of packed ‘cinder’ making the cycling easy and they quickly started knocking down the miles through beautiful pine forests. 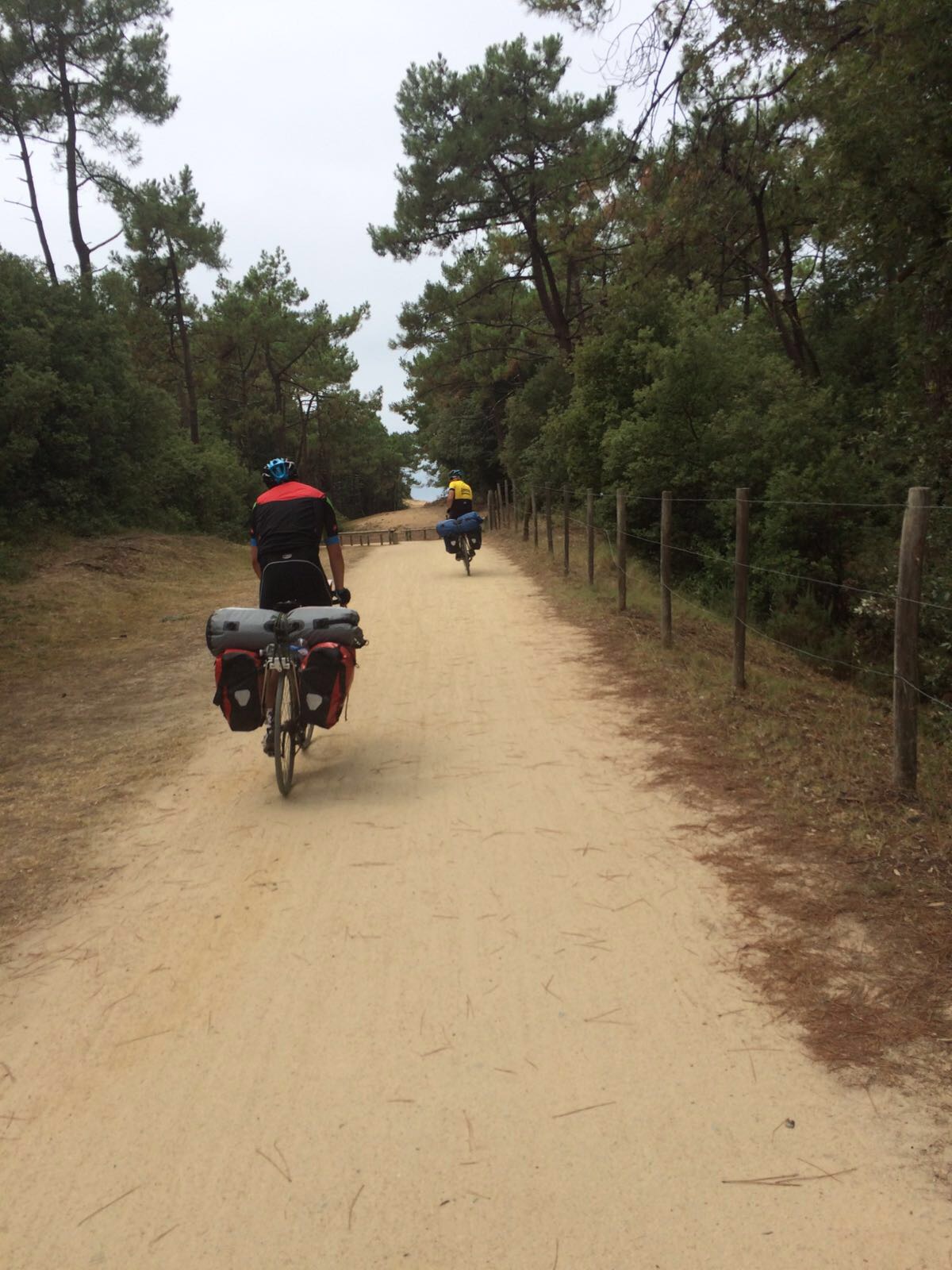 The trail then took them directly along the coast, giving them their first real sight of the sea on the trip and no worries about having to deal with inpatient motorists – in fact the trail was quite quiet and they were able to enjoy the ride 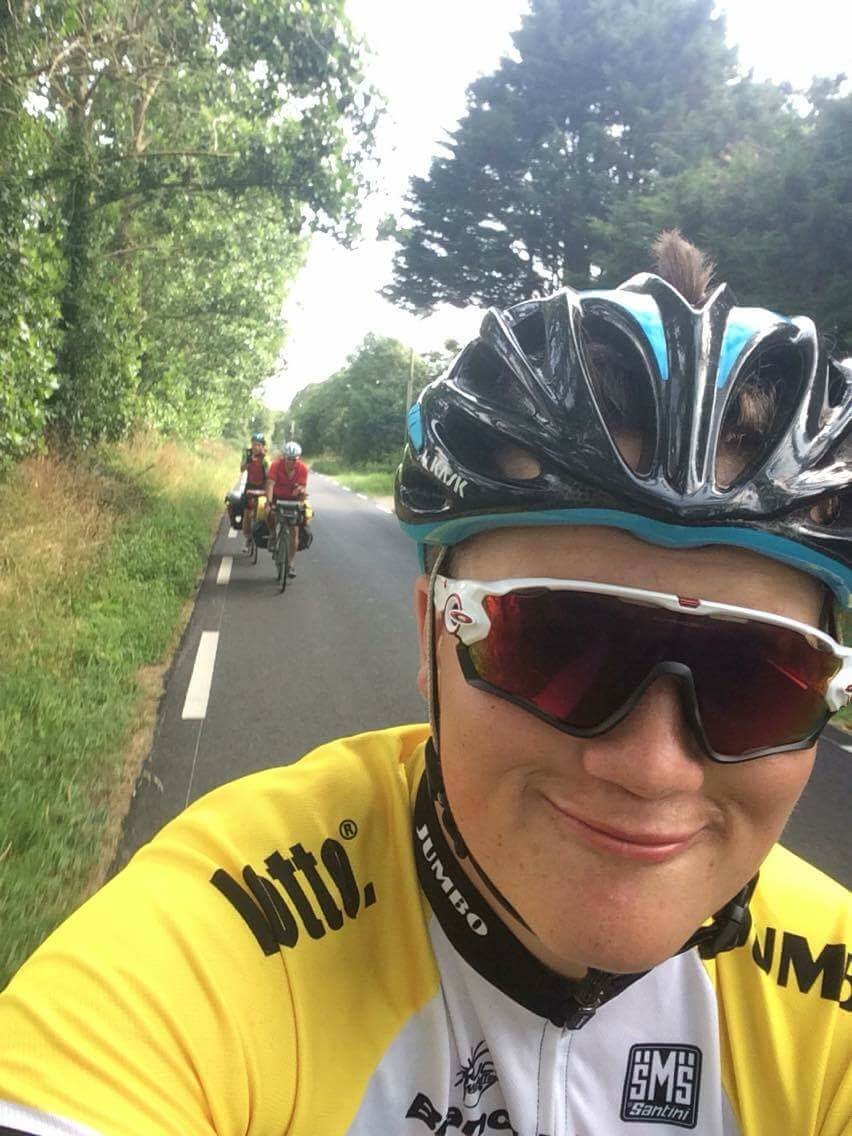 Tom clearly having a great time!

They made great progress arriving in the busy port & resort of Les Sables D’Olonne by mid afternoon…….. 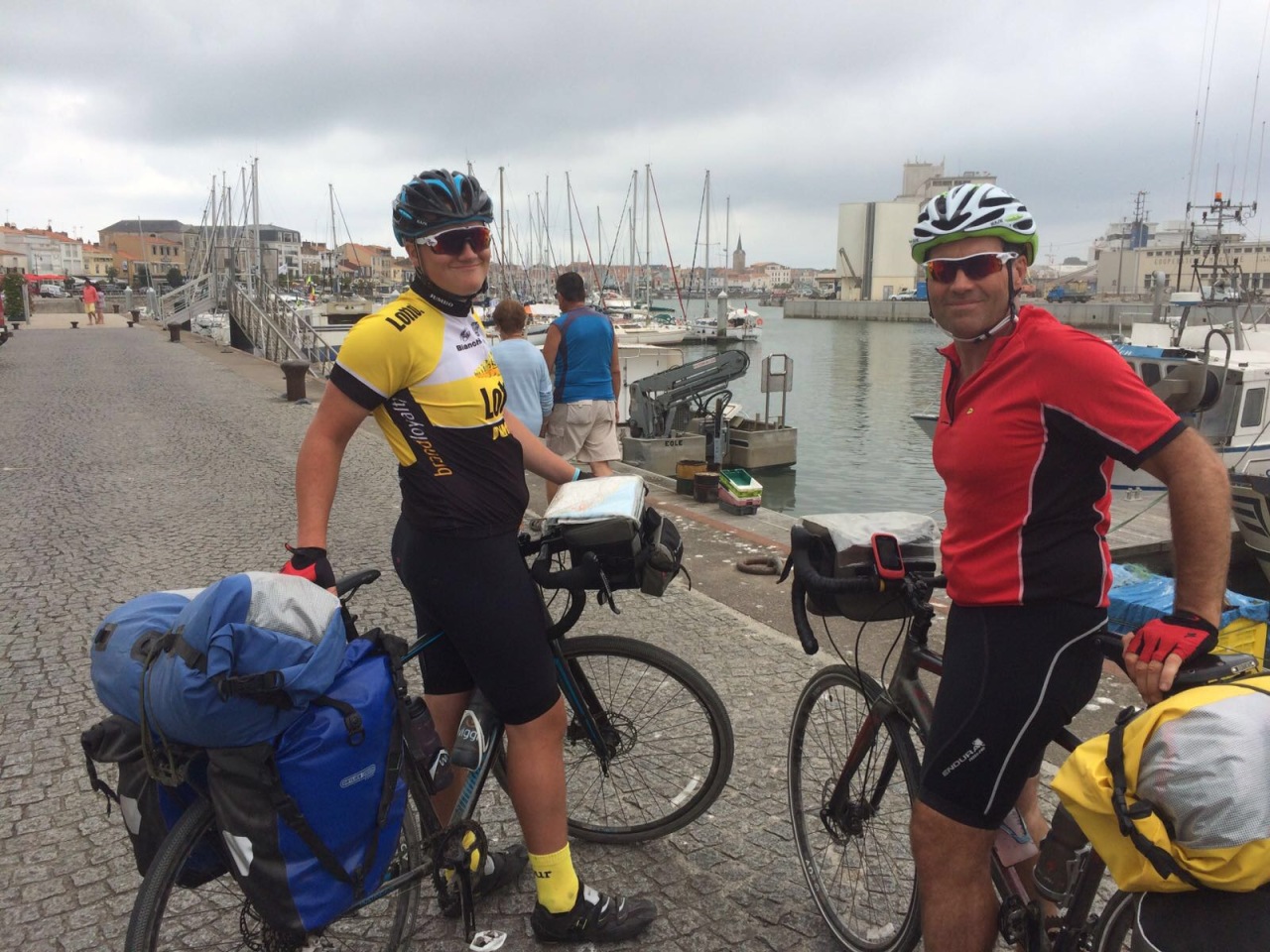 On the way into Les Sables D’Olonne

……….
taking a short break before heading on again. 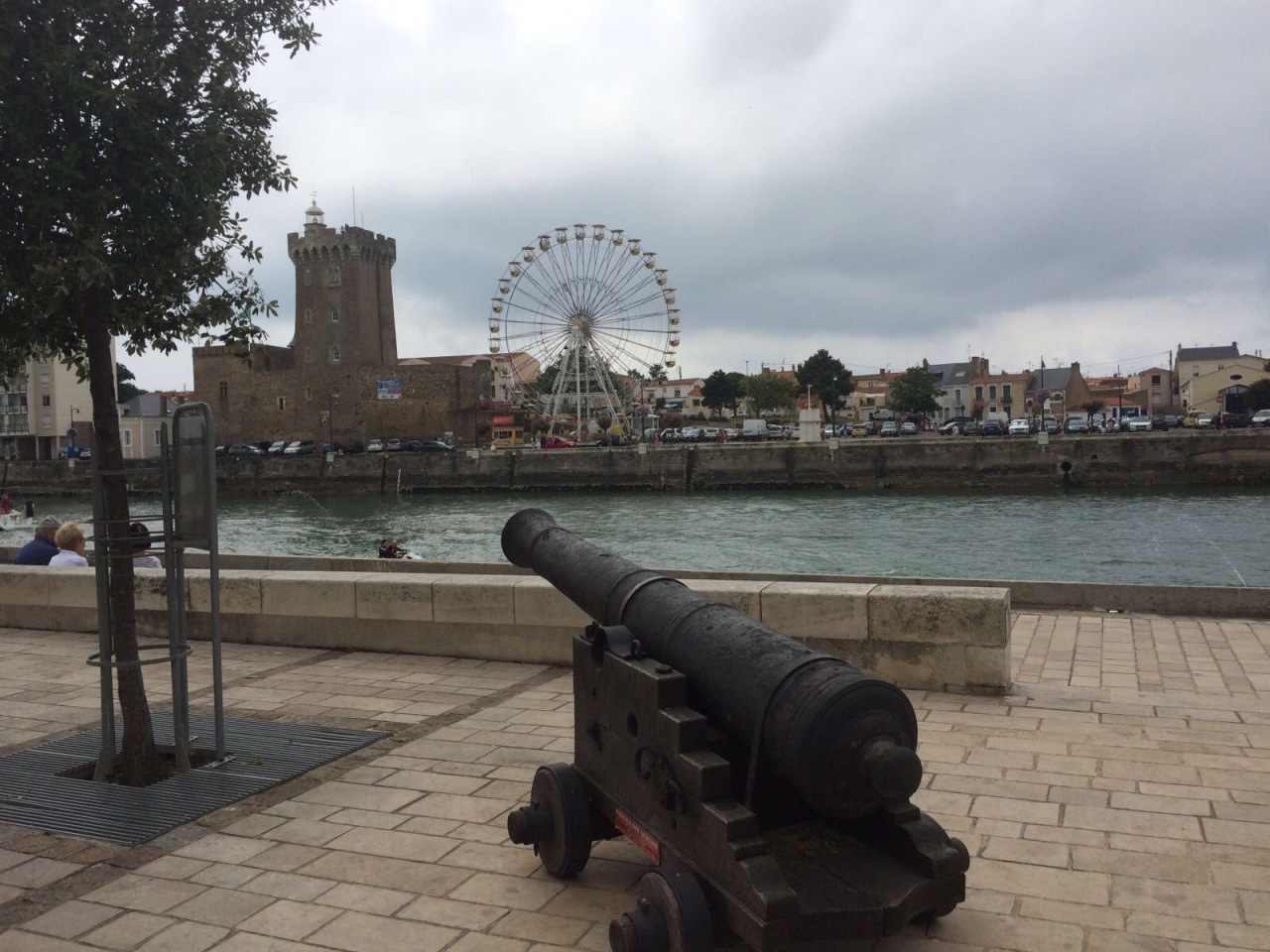 The town itself was heaving with people, but really well set up for cyclists with roads split into two with one carriageway dedicated to bikes, which meant getting through the town was easier than it could have been!

Back on the cycle trail again & continuing South

Once out they again picked up the trail down the coast & headed on to the village of Saint Vincent Sur Jard, where they managed to find the local Municipal Site http://www.camping-lepiedgirard.com/
– a much better option for 3 tired cyclists wanting a decent night’s sleep, than the larger sitesthat were packed with vans & entertainment late into the evening!

Municipal sites are certainly the best option for the boys

So no little adventures today, just a great day’s cycling with another 67 miles done.

The tent is set up & the boys are heading off for a much needed & deserved Pizza, before hopefully a decent night’s sleep ahead of (all being well) riding on to La Rochelle tomorrow.