There are some things your children will never let you forget.

A good few years ago we spent a month in New Zealand, having a fantastic time pottering around the islands. One evening, whilst we were staying near Rotorua I suggested that we follow the signs for a nature walk before tea

‘How long is it’ the boys asked, to which I replied ‘I’m sure it’s only going to take 10 minutes’ ……… An hour and a half later, slightly dishevelled & rather hungry we found our way back to the motorhome. Since then when I suggest going for a walk we haven’t done before the question inevitably comes ‘Is it one of mum’s 10 minute walks?’

Over the last few days we have done a little bit of exploring around the house where we are staying and have found a stony forest track that leads along the edge of the Luberon to the village. I had a look at the map & noticed it is part of the GR6 long-distance walking route through the region and that it continues to track along the edge of the slopes to Oppede Le Vieux. As our eldest had some College work to do my hubby suggested that we walk through to Oppede Le Vieux, with our youngest for a drink.

We set off and followed the track to the rear of the village camp-site, where there was a large board highlighting the wildlife that can be seen across the Luberon National Park. I was particularly surprised to see that it is a sanctuary for the Egyptian Vulture, with them being closely monitored within this habitat. We had seen many large Raptors flying above the rocks behind the house and wonder now if some may have been these rare birds.

The path then led through the camp-site and onto a rough road that led away from Maubec through  vineyards, cherry orchards & olive groves (a typical Provencal landscape). We had no map with us, but as ever in France the paths were very easy to follow with regular markings on trees and rocks along the route, with a straight line signifying you are on the right track, left and right turnings marked and crosses placed on trees at junctions to show the track doesn’t go that way. There are often a number of trails using the same tracks so it is always worth knowing which colour you should be following

The track here was delightful and fringed on either side with verges full of wild-flowers & herbs, which scented the air beautifully. 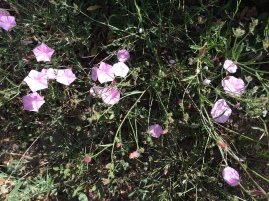 It was clearly a very old trackway, with clear grooves worn into the rocky bed, seemingly made from years of carts passing through. 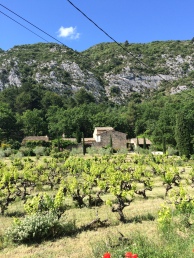 ………. and spectacular views towards Mont Ventoux

All was going really well and any fears of this being ‘one of those walks’ were quickly allayed, so you can imagine that I was a little surprised when what had looked like a relatively gentle walk with slight inclines on the map, took a sharp turn up through the forest, taking a steep, rocky and debris covered route up through the trees. This was when we started to question whether we really were wearing the best footwear for the conditions, particularly as one of us was wearing a pair of Birkenstocks (not renowned for being good hiking shoes!!)

We stuck with it though and the narrow  track led us on through the woodland, up steeper and more treacherous paths, before dropping down again, where we found ourselves slipping on the pebbles that slid like marbles as we walked. It was though lovely to be in the woodland, no sound of anything other than birdsong and the occasional scuttle of a lizard from the track, although we did jump a little when a small snake slithered across in front of us as we interrupted its rest in a sunny spot.

Eventually we came into a clearing and saw the ruined castle of Oppede Le Vieux rising dramatically out of the rocks above us and realised we had been on the right path all along. When you see the castle from this angle it is easy to see why it was built there and what a fortress it must have been as it appears to be balanced right on the edge of vertical cliffs

We then dropped down again, before climbing gently up an old cobbled track that emerges onto the road into the village just below the main square, where we took a break for a well-earned drink.

We had told our eldest we would be back for lunch so meandered back along the old pathway we had taken into the village, picking up the cycle-route back towards Maubec, before cutting back onto the ancient cartway we had originally walked along.

The signs suggested it was 3.5 km to Oppede Le Vieux, but it certainly felt like more on the way out – the walk out took 1hr 40 mins & the walk back 45 mins – amazing that the terrain can make quite such a difference

All in all we had a lovely walk, our youngest loved the climb up through the forest and the route we took into the village and it goes without saying that we worked up a great appetite for lunch …………